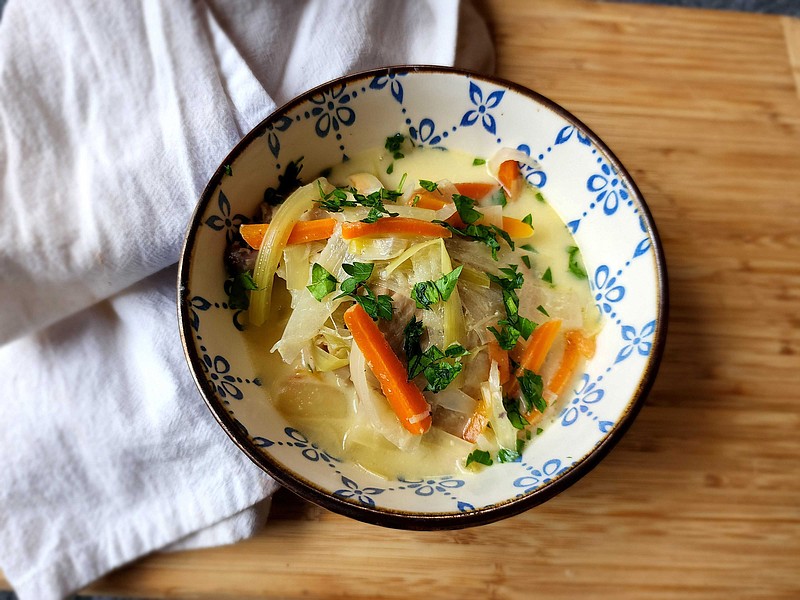 Julia Child’s Chicken Waterzooi is a quick meal that she called “one of my favorite recipes.” (Sharyn Jackson/Minneapolis Star Tribune/TNS)

As the HBO Max series winds down, take a page from the chef's playbook and start mastering the art of French cooking.

"Julia," the HBO Max series chronicling Julia Child's trajectory from cookbook author to unexpected television star and national icon, ended recently. (The streaming service has yet to announce whether there will be a second season.) And what better way to celebrate the series than with a meal designed by "The French Chef" herself?

Child's vast canon of recipes is known for its deference to French tradition, fearless approaches to various animals and their parts, and the liberal use of butter. What they're not known for? Ease. Sure, a French omelet takes less than 30 seconds to make. And countless attempts to perfect the flip-and-roll movement that defines it.

"Learning to make a good omelet is entirely a matter of practice," Child writes in her seminal "Mastering the Art of French Cooking." "Do one after another for groups of people every chance you get for several days, and even be willing to throw some away. You should soon develop the art."

Some of her most famous recipes are the titles of episodes in the series that stars Sarah Lancashire as the lilt-voiced Child: coq au vin, beef Bourguignon, crêpes Suzette -- those dishes that, in "Mastering," send you all over the book looking for secondary recipes just to get all the ingredients ready. Or that involve setting something aflame.

But Child gave us so much more than that. She made French cooking approachable, even if it took time and work to get there. As "Julia" winds down, take on the challenge of a Child recipe or two to honor the grande dame of French home cooking. Bon appétit!

Note: This Flemish dish is traditionally made with fish, but Child liked to swap in a whole cut-up chicken, which poaches in a delicate broth. It's a quick meal; the most time-consuming part is julienning all the vegetables. The creamy soup is loaded with spring vegetables, deepened with vermouth and made luxurious with the addition of six -- yes, six -- egg yolks. Writing in the New York Times in 1987, Child credited the recipe to her teacher Max Bugnard, who had a restaurant in Brussels before World War II, and served the dish with eel and white fish in that rich broth. "A divine ambrosia indeed," Child wrote, "and in those halcyon days nobody gave a thought to six egg yolks, large dollops of heavy cream and lashings of butter." She called this "one of my favorite recipes." Serve with noodles or dumplings, or crusty French bread to sop up that broth. From the New York Times.

2 1/2 pounds cut-up frying chicken, legs or thighs or breasts (with bone), or a mixture of these

Trim and wash the vegetables and cut them into julienne matchsticks 1 3/4 inches long and 1/8 inch wide. (This should come to about 5 cups in all.) Toss them in a large mixing bowl with the tarragon and a sprinkling of salt and pepper.

Pat the chicken pieces dry and set aside.

When ready to cook, bring to a simmer, covered, and cook slowly 25 to 30 minutes, or until the chicken pieces are tender and, when pierced, the juices run clear.

Strain out the cooking liquid, degrease it and adjust the seasonings.

Blend the cream and cornstarch in a small mixing bowl. Whisk the egg yolks in a large bowl and stir in the cream mixture. Slowly whisk in the hot cooking liquid. Pour the sauce over the chicken. Set over medium-low heat, swirling the casserole gently, until the sauce is warmed and thickens slightly, but do not bring to a simmer or the egg yolks will curdle.

To serve, ladle the chicken, vegetables and sauce into large warm soup bowls and sprinkle each serving with parsley.

Note: In the first episode of "Julia," Child makes this cake to butter up the public television producers who would decide the fate of her idea for a television show. (It worked.) The power of this chocolate and almond cake was clear to Child; she once wrote that it was the first French cake she ever tried. She preferred the cake slightly undercooked in the center, which gives it a "special creamy quality." The recipe is easy and versatile -- top with a buttercream frosting, whipped cream or nothing at all. From "Mastering the Art of French Cooking."

Preheat oven to 350 degrees Fahrenheit and set oven rack in center position. Butter and flour an 8-inch round cake pan.

To prepare the cake: Set the chocolate and coffee or rum in a small pan, cover and place (off heat) in a larger pan of almost simmering water; let melt while you proceed with the recipe.

Cream the butter and 2/3 cup sugar together for several minutes until a pale yellow, fluffy mixture forms.

Beat in the egg yolks until well blended.

With a rubber spatula, blend the melted chocolate into the butter and sugar mixture, then stir in the almond flour (or ground almonds) and almond extract. Immediately stir in 1/4 of the beaten egg whites to lighten the batter. Delicately fold in a third of the remaining egg whites and, when partially blended, sift in a third of the flour and continue folding. Alternate rapidly with more egg whites and more flour until all egg whites and flour are incorporated.

Turn the batter into the cake pan, pushing the batter up to its rim with a rubber spatula. Bake for about 25 minutes. Cake is done when it has puffed, and 2 1/2 to 3 inches around the circumference are set so that a needle plunged into that area comes out clean; the center should move slightly if the pan is shaken, and a needle comes out oily.

Allow cake to cool in the pan for 10 minutes. Run a knife around the edge of the pan, and reverse cake on the rack. Allow it to cool for an hour or two; it must be thoroughly cold if it is to be iced.

To prepare the icing: Place the chocolate and coffee or rum in the small pan, cover, and set in a larger pan of almost simmering water. Remove pans from heat and let chocolate melt for 5 minutes or so, until perfectly smooth. Lift chocolate pan out of the hot water, and beat in the butter a tablespoon at a time. If the icing is too runny, set the bowl of chocolate into an ice bath and beat until the chocolate mixture has cooled to spreading consistency.

To serve, spread the icing over cake with a spatula or knife, and press a design of almonds over the icing, if desired.

Print Headline: Channel your inner Julia Child with these recipes that are actually achievable