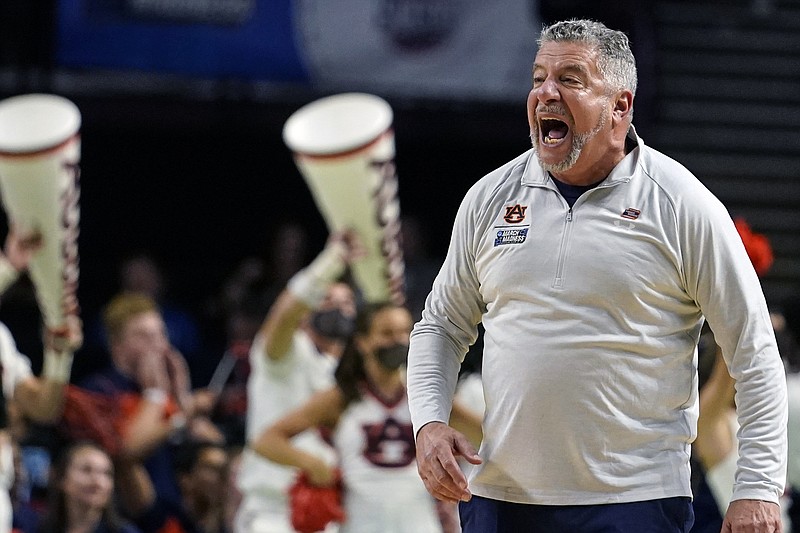 Auburn head coach Bruce Pearl yells towards his players during the first half of a college basketball game in the second round of the NCAA tournament against Miami, Sunday, March 20, 2022, in Greenville, S.C. (AP Photo/Brynn Anderson)

Coach Bruce Pearl and Auburn lost two stars to the NBA from what he considered college basketball's best frontcourt.

So, the Tigers did what most college programs are doing: They turned to the transfer portal. Auburn filled the gaping voids left by likely first-round picks Jabari Smith and Walker Kessler with a former LSU commitment and then a key NCAA transfer portal pickup. Problem, presumably, solved.

"All of a sudden, the season's over and you're down two first-round picks on the front line," Pearl said.

It's one example among many in a new world of college basketball. Instead of being stuck picking up one of the few recruits remaining when top players exit early and sometimes unexpectedly, coaches can raid the transfer portal for a college veteran or four.

Pearl counted on four transfers, including Kessler, and prized freshman Smith -- the potential top NBA draft pick -- to the program's first No. 1 ranking and a regular-season Southeastern Conference championship last season. The Tigers went from 13-14 to 28-6.

Other teams are trying to fortify their rosters or spark similar rebounds with transfers to supplement the traditional high school signees.

Players had until May 1 to enter the portal to be immediately eligible in fall and winter sports, but some top names still haven't announced a destination.

Those include late entries like Kentucky's Keion Brooks, Baylor's Matthew Mayer and New Mexico State's Teddy Allen -- presuming none of them opt to turn pro instead.

Florida's Keyontae Johnson, who hasn't played since collapsing on the court in December 2020, has also entered the portal hoping to make a comeback.

Among the notable moves in women's basketball, twins Haley and Hanna Cavinder, who both have large social media followings, have transferred from Fresno State to the Miami Hurricanes.

As easily as the portal can take away -- it can give right back.

Among the biggest portal moves was SMU's high-scoring guard Kendric Davis saying he was heading to Memphis, which lost one-time top recruit Emoni Bates to the portal. Bates hasn't announced a new school.

Graduate transfer Emmitt Matthews returned to West Virginia, where he was a three-year starter, after one season at Washington. He has logged 98 starts at the two schools. The Mountaineers have landed three Division I transfers and two junior college players.

Smith and Kessler declared for the draft after one season at Auburn. The Tigers lost to Miami in the second round of the NCAA Tournament after landing a No. 2 seed.

Meanwhile, coaches are still not sure who will be on their roster come next season.

"It's not changing. The portal's here for good. NIL's here for good," said ESPN analyst Seth Greenberg, who spent two decades as a college head coach. "But the uncertainty of the spring and summer is also here for good, and it's not going to change.

"There's going to be constant movement of rosters all the way up to the middle of the summer. Whether it's good or not, it's not changing."

Arkansas made an early splash after relying heavily on several transfers for an Elite Eight run.

Transfers played leading or key supporting roles for a number of last season's top teams, and likely will in 2022-23 as well.

No team felt the transfer portal's sting quite like LSU, which appeared poised to lose every scholarship player from last season to either the portal or the NBA draft. LSU fired coach Will Wade and has NCAA sanctions potentially looming. New coach Matt McMahon kept some key players and recruits in the fold and brought in transfers, too.

The national champion Jayhawks added a key piece last May 17. Two-time All-Pac 12 guard Remy Martin transferred after four seasons at Arizona State. He mostly served as a key reserve but made 4 of 6 3-pointers and scored 14 in the championship game.

"But what the transfer portal does, it allows you not to take a step back whenever you have unexpected things happen during the season," Self said during the Jayhawks' run to the national title.

National runner-up North Carolina got a huge boost with the arrival of forward Brady Manek, a four-year starter at Oklahoma. Manek averaged 15.1 points and 6.1 rebounds and shot 40% from 3-point range.

Greenberg cites players like Manek, Martin and Kentucky's Kellan Grady (from Davidson) as transfers who proved good fits with their new teams.

"The guys that went into the portal and were about winning ended up doing well."

This offseason, UConn has lost four players to the transfer portal and two more -- guards R.J. Cole and Tyrese Martin -- opted to turn pro rather than return for their extra COVID-19 year.

"It's almost like a different type of sport in terms of your program and how you've got to adapt and be agile," UConn coach Dan Hurley said. "It's something, obviously, that we've got to adjust to."

Overall, Pearl feels like the portal is good for the players and college sports. After all, he's made plenty of stops in his own career before landing a new eight-year, $50 million contract from Auburn in January.

"I don't like that there are three-and-a-half players per team in the portal," Pearl said. "I'd rather teach them to fight than flee, but that's OK. I transferred several times in my career."

Now, it's also about business for the players, too. 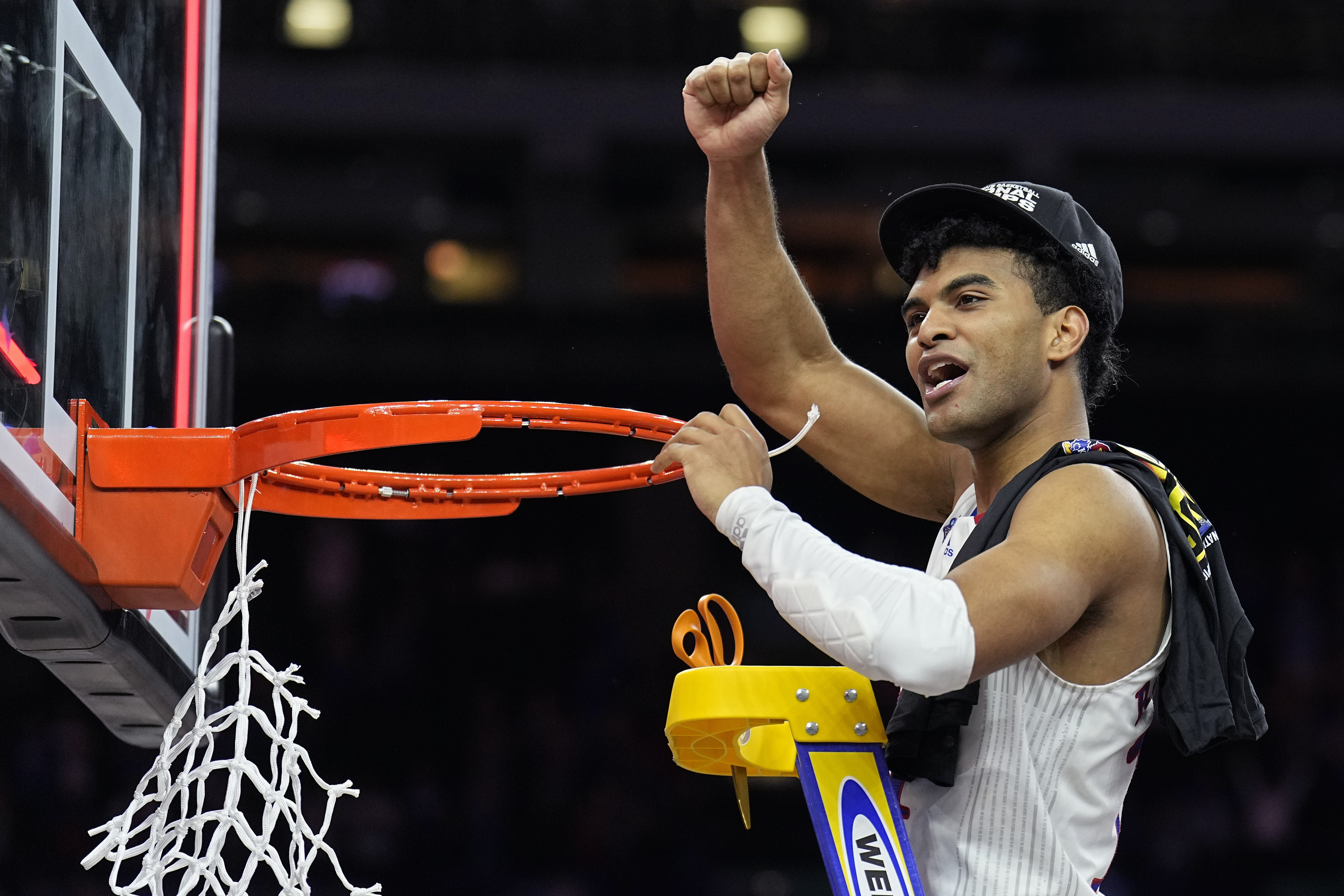 Kansas guard Remy Martin cuts the net after their win against North Carolina in a college basketball game at the finals of the Men's Final Four NCAA tournament, Monday, April 4, 2022, in New Orleans. (AP Photo/Brynn Anderson) 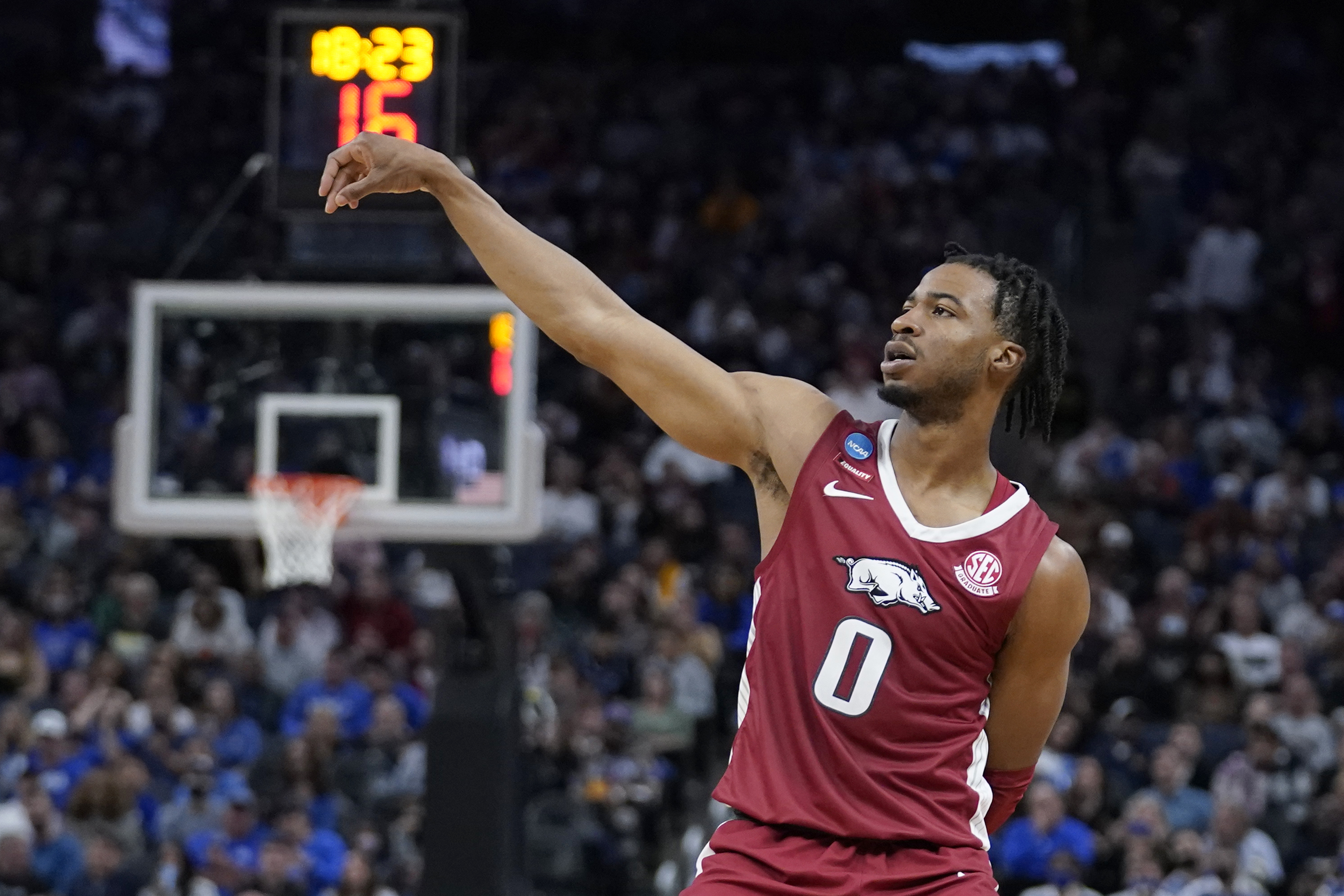 Arkansas guard Stanley Umude (0) watches his shot against Duke during the second half of a college basketball game in the Elite 8 round of the NCAA men's tournament in San Francisco, Saturday, March 26, 2022. (AP Photo/Marcio Jose Sanchez) 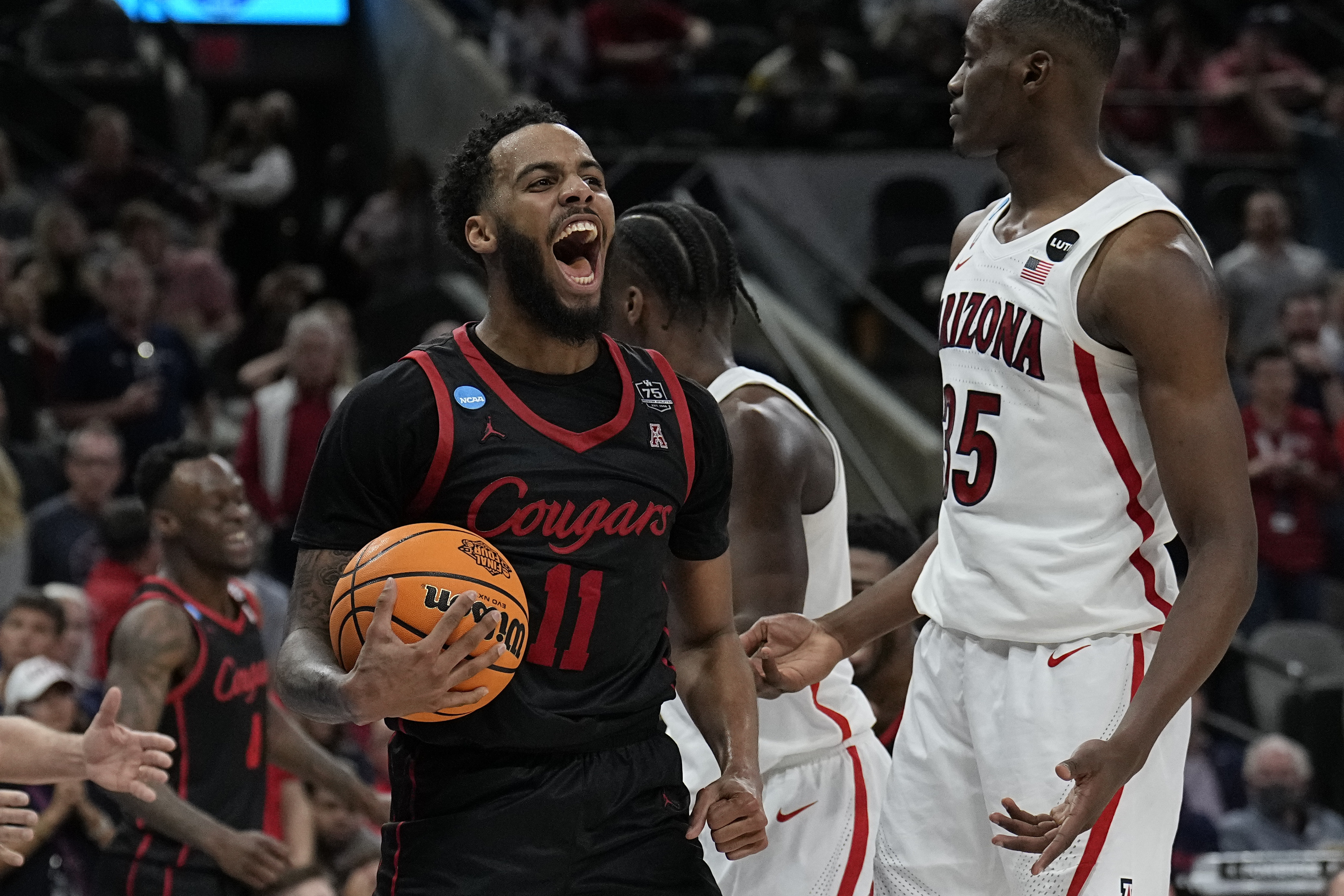 Houston guard Kyler Edwards celebrates after scoring during the second half of a college basketball game against Arizona in the Sweet 16 round of the NCAA tournament on Thursday, March 24, 2022, in San Antonio. (AP Photo/Eric Gay) 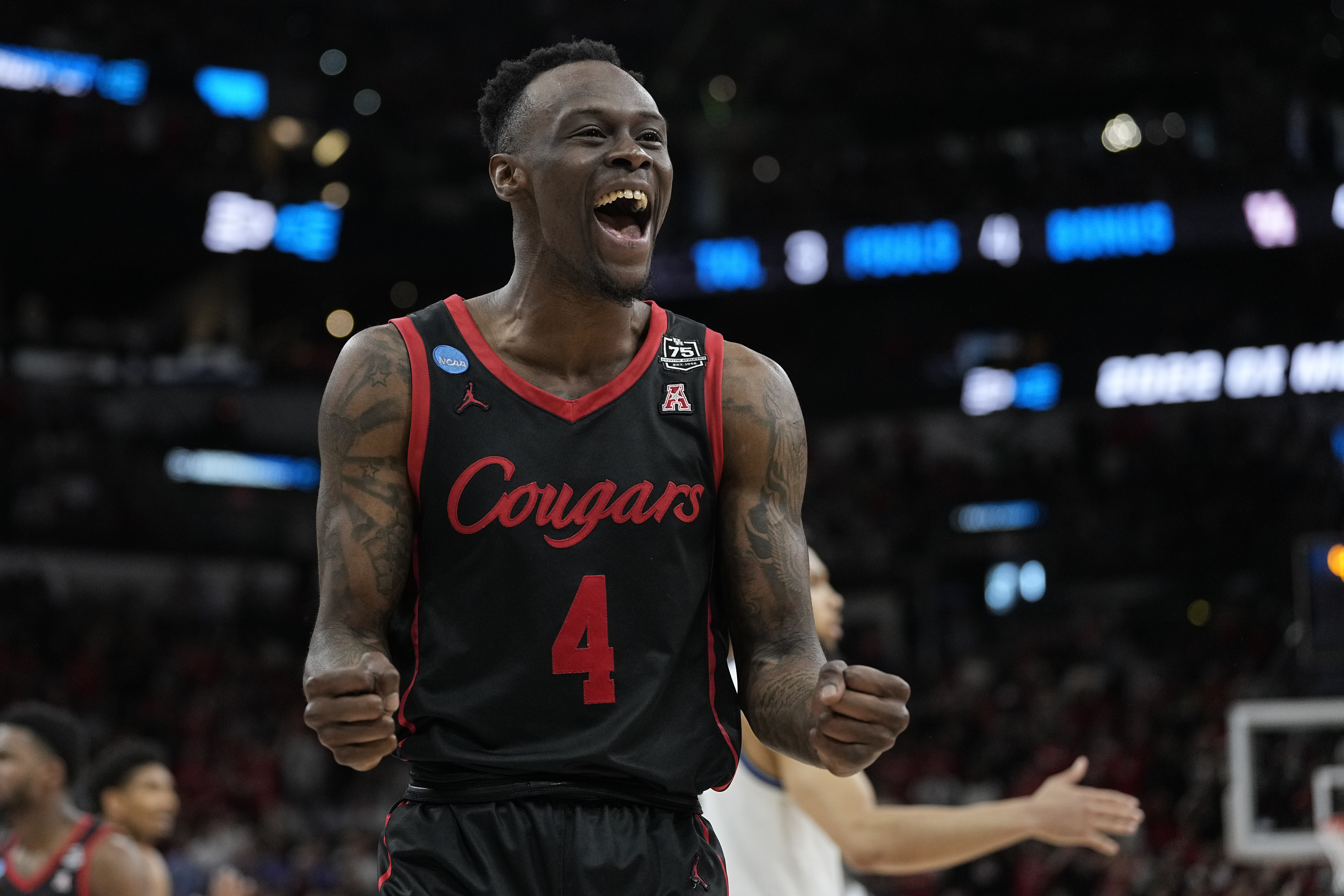 Houston guard Taze Moore celebrates after scoring against Villanova during the second half of a college basketball game in the Elite Eight round of the NCAA tournament on Saturday, March 26, 2022, in San Antonio. (AP Photo/David J. Phillip) 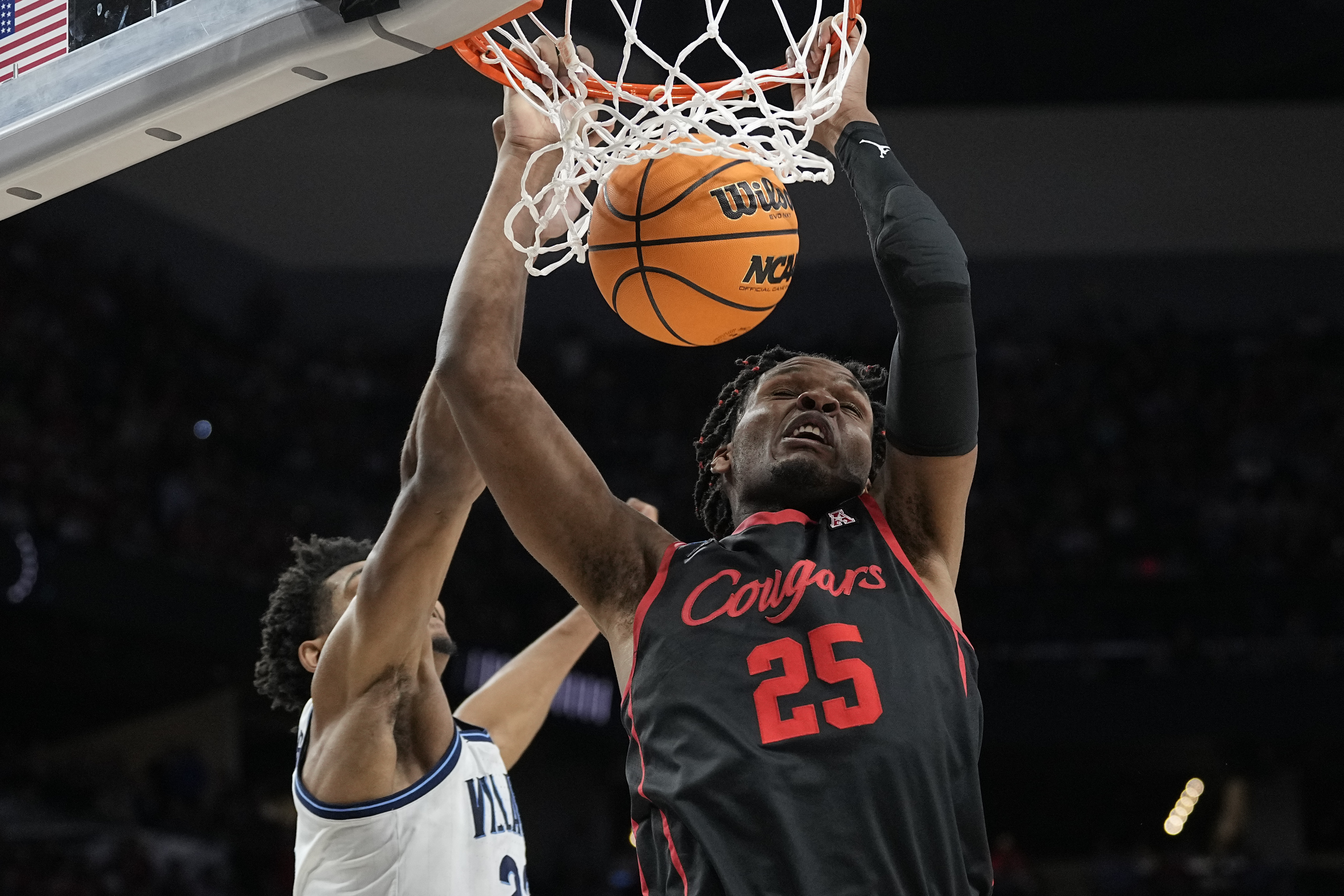 Houston center Josh Carlton dunks in front of Villanova forward Jermaine Samuels during the first half of a college basketball game in the Elite Eight round of the NCAA tournament on Saturday, March 26, 2022, in San Antonio. (AP Photo/David J. Phillip) 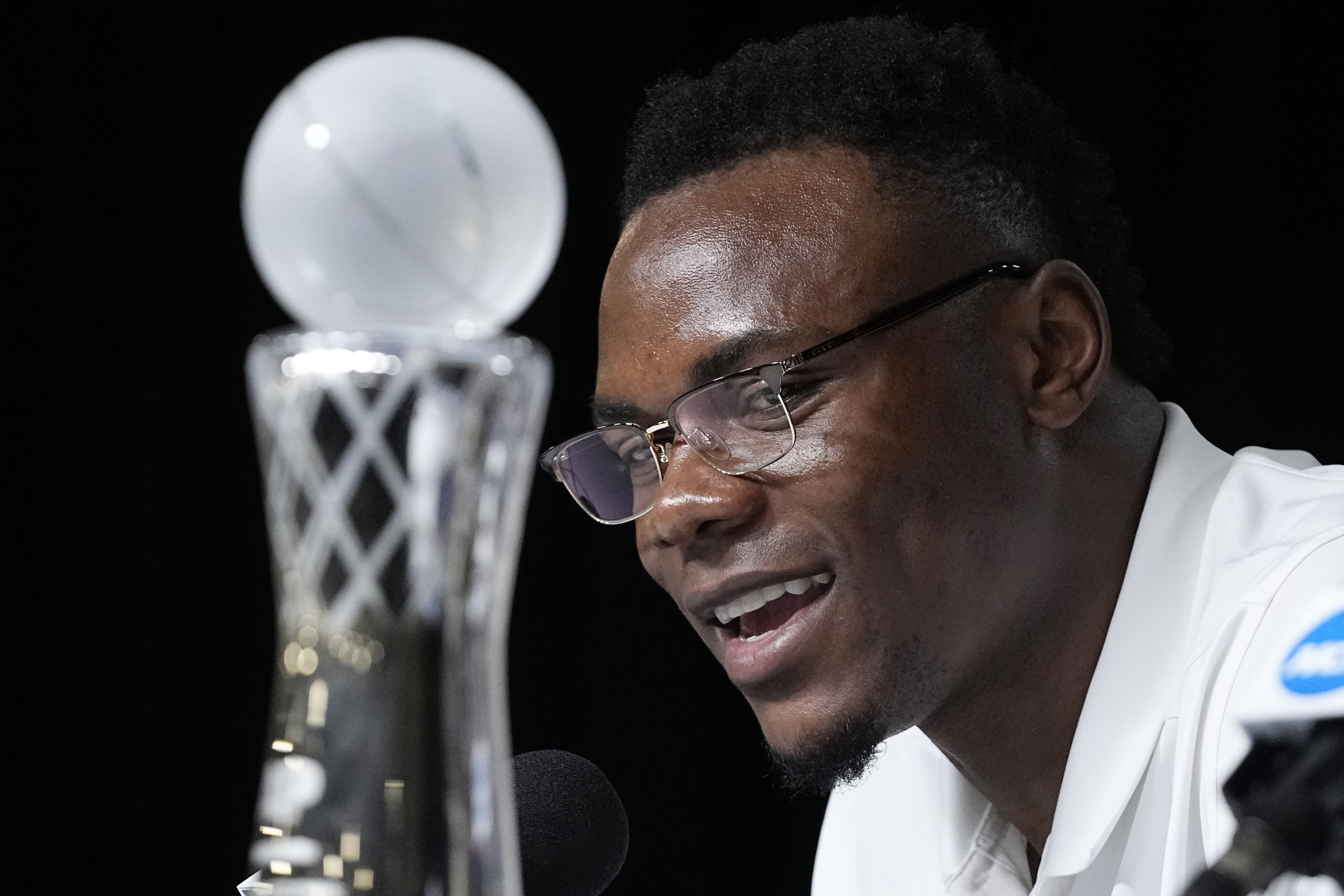 Oscar Tshiebwe of Kentucky speaks as he is introduced as The Associated Press men's basketball player of the year, in New Orleans, Friday, April 1, 2022. The 6-foot-9, 255-pound junior received 46 of 60 votes from a national media panel. Wisconsin's Johnny Davis was second with 10 votes. (AP Photo/Gerald Herbert) 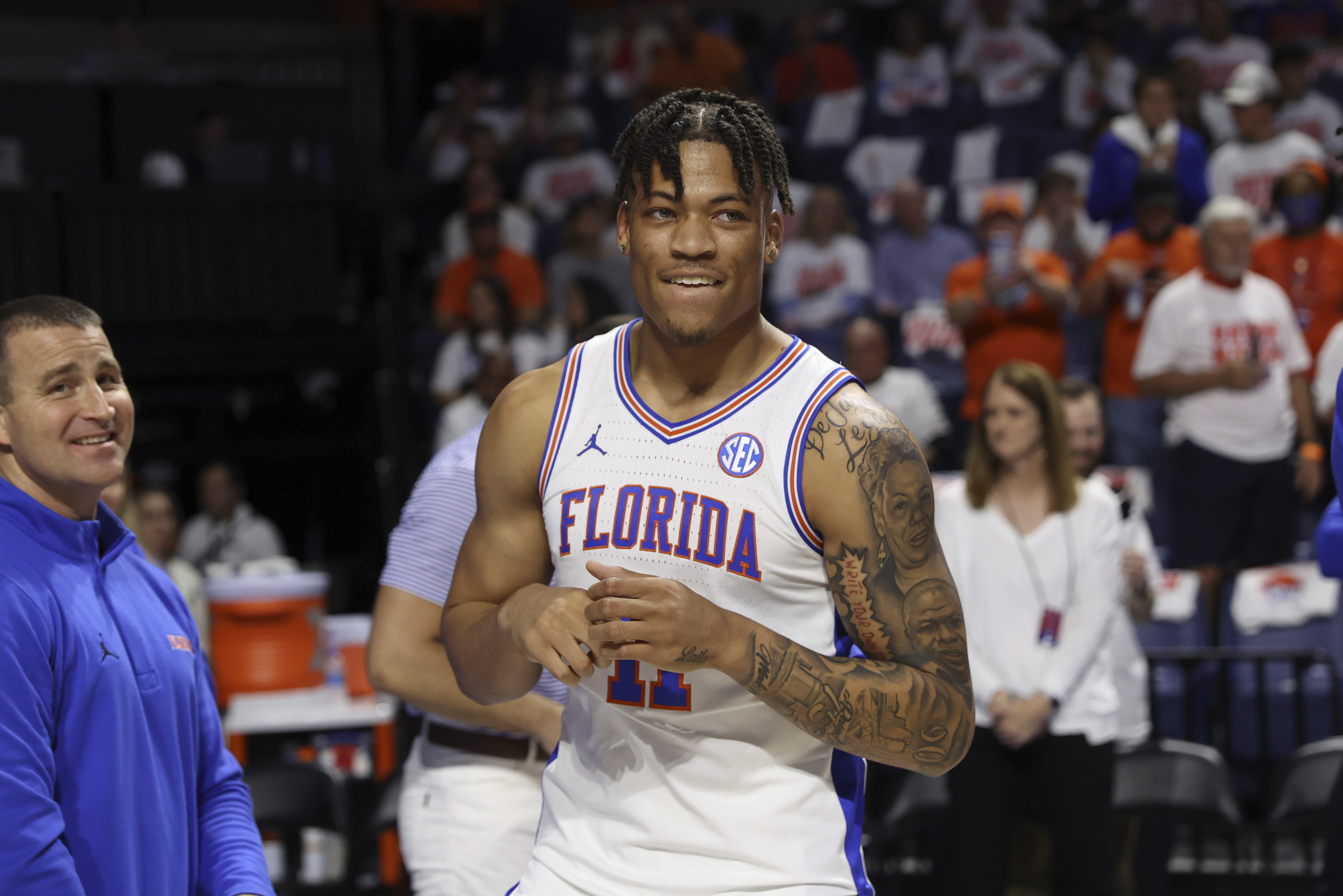 FILE - Florida forward Keyontae Johnson, center, smiles after being introduced as a starter before an NCAA college basketball game against Kentucky, March 5, 2022, in Gainesville, Fla. Johnson, who collapsed during a game in December 2020 and has not practiced or played since, has entered the NCAA transfer portal with hopes of resuming his college career. (AP Photo/Matt Stamey, File)