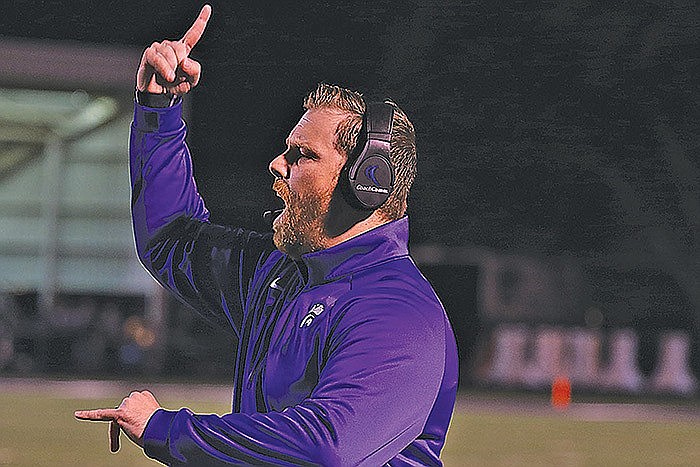 Defensive Coordinator Trey Outlaw signals his alignment for a play during a game in the 2019 season. Outlaw has been announced as the new Athletic Director and head football coach at Arkansas High on Tuesday, May 17, 2022.

William 'Trey' Outlaw, who helped lead Class 6A El Dorado High School to deep runs in postseason play the past three seasons, including a state championship in 2021 as an assistant head coach and defensive coordinator, will lead the Razorback program going forward, according to the Texarkana Arkansas School District.

Former head coach and Athletic Director Barry Norton announced in April that he would resign.

"We look forward to welcoming Coach Outlaw to the Razorback Family," TASD Superintendent Dr. Becky Kesler said in a release. "His energy and drive, along with his experience and background, will lead our program to the next level."

"Successful academic performance is the key ingredient to sustaining a championship level program," Outlaw said. "All athletes are students first, and graduating high school is the top priority above any other achievement for our athletes."

Outlaw replaces Norton, who coached Arkansas High for the past five seasons, leading the Razorbacks to two conference championships, an undefeated regular season and a 5-4 playoff record. Norton advanced to the postseason all but one year during his tenure at Arkansas High.

Prior to taking over and rejuvenating the Razorback program, Norton held the same positions at Texas High for 18 years. He compiled a career record of 184-74-1 during his 23 seasons as head coach, winning the Class 4A, Division I state title with the Tigers.

"I've enjoyed my five years here. Dr. (Becky) Kesler and the school board have been fabulous, and I certainly appreciate them for the opportunity to coach here," Norton told the Texarkana Gazette. "I just think it's the right time to give someone else a shot at it."