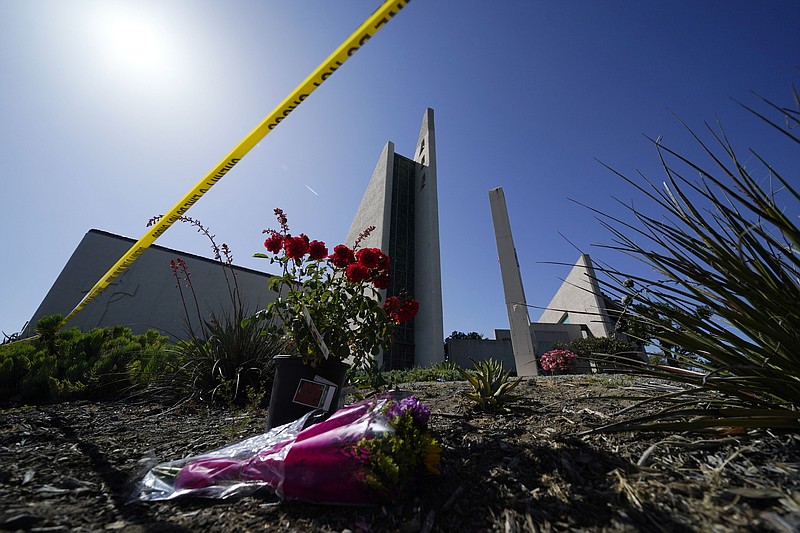 FILE - Flowers sit outside crime scene tape at Geneva Presbyterian Church on May 17, 2022, in Laguna Woods, Calif., where a shooting at the church on Sunday left one dead and five injured. Officials in California's Orange County are still trying to determine why a gunman opened fire in the church. (AP Photo/Ashley Landis, FILE)

It is where the congregation in Laguna Woods worshipped. But it was also where their native language and support for a democratic Taiwan thrived. Sunday's mass shooting by man officials say was motivated by political hate of Taiwan has spotlighted the Presbyterian Church of Taiwan's close connections to the nation's democracy movement.

Jerry Chen, a church member who dialed 911 after fleeing the gunman, calls himself a "proud Presbyterian" and says the congregation, while avoiding politics in church, likes to talk about what is going on in Taiwan.

"We care deeply because we grew up in Taiwan," he said.

Chen, 72, has been a congregant since the church's founding 28 years ago. He is puzzled why a man who has no apparent connection to the church would drive from Las Vegas to Laguna Woods, a town of 16,000 populated mostly by retirees, to carry out such an attack.

Members had gathered on Sunday for the first time since the coronavirus pandemic struck for a luncheon honoring their former pastor, Billy Chang, who was visiting from Taiwan.

Investigators are still piecing together information about the gunman, 68-year-old David Chou, who was born in Taiwan after his family was forced to leave China when the Communists took power. They said they obtained Chou's handwritten notes documenting his hatred of Taiwan. In addition to murder and attempted murder, Chou could also face hate crime charges.

The small, tight-knit congregation was a space where older Taiwanese immigrants supported each other, said Sandy Hsu, whose in-laws made a last-minute decision not to attend the luncheon. The shooting has sowed fear and anxiety in the Taiwanese community nationwide, she said.

"My in-laws are questioning if it's safe to get together in the future," Hsu said. "We're asking ourselves if it's safe any more to talk about politics or freely express our views."

Second-generation Taiwanese Americans like Leona Chen say their churches -- Presbyterian or any other denomination -- have been a "social haven."

"I have very visceral memories of potlucks where aunties would cook traditional dishes and play matchmaker for the young adults," said Chen, editor of Bay Area-based TaiwaneseAmerican.org, the website and nonprofit serving the Taiwanese American community.

"Uncles who were retired engineers would help kids with calculus and SAT prep. Church was also a place where everyone figured out life in a foreign country together -- from jury duty and homeownership to their kids' college applications."

But, she also views the church as "a political space."

"Especially in the (Taiwanese) Presbyterian Church, there is a theological commitment to activism, to fight against injustice," she said. "Churches became sanctuaries for pro-democracy groups."

Taiwan is majority Buddhist and Taoist; Christians make up only 4% of the population.

The Presbyterian Church carved a niche and grew in political stature in the 1950s after the Kuomintang -- or KMT party -- came into power in Taiwan, said Christine Lin, who published a book in 1999 about the Presbyterian Church as a vital advocate of local autonomy in Taiwan. The party imposed what many perceive as an oppressive regime and targeted Presbyterians, even labeling them "terrorists," she said.

On June 28, 1997 -- three days before Hong Kong's reversion to China -- Lin recalls being at a rally with 60,000 people outside Taipei's World Trade Center. She said nearly a third of those gathered were Presbyterians who arrived by bus from across the country.

Lin, who grew up going to a Taiwanese Presbyterian church in St. Louis, saw a Presbyterian minister leading the crowd in singing phrases in Taiwanese like "Make Taiwan Independent" to the tune of "Glory, Glory Hallelujah."

Lin's uncle and aunt, who both attend the Laguna Woods church, stayed home on Sunday, she said. Even though she was left wondering why the attacker chose this particular congregation, Lin said she wasn't surprised that he chose a Taiwanese Presbyterian church. Her undergraduate thesis as an Asian Studies major in Dartmouth College was centered on this very topic.

"The Presbyterians not only succeeded in Romanizing the spoken Taiwanese language but also provided services such as education and healthcare that other churches did not provide," she said.

The church distinguished itself as a "native church" that represented Taiwanese, Hakka and Indigenous people, with a political vision rooted in democracy and self-determination -- ideals many Taiwanese found attractive, Lin said.

The Presbyterian Church was also instrumental in bringing members of the Democratic Progressive Party into power, said Jufang Tseng, dean of the School of Theology at Charisma University, an online institution based in the Turks and Caicos Islands.

Tseng worked in the Presbyterian Church of Taiwan's media department from 2001 to 2003. Raised in a family that favored Taiwan's reunification with China, Tseng said her mindset later changed thanks to the Presbyterians.

"The Presbyterian Church has always been more inclusive," she said, adding that church leaders were adept at navigating secular spaces while not imposing their religious beliefs on others. "Their motivation was faith-based, but they didn't push Christianity on anyone."

In the U.S. most Taiwanese Presbyterian churches largely stayed away from politics, Lin said.

"The Presbyterian Church of Taiwan was certainly involved politically especially from the 1970s," she said. "But, the churches here, while they promoted the Taiwanese language and supported self-determination and democracy in Taiwan, did not make overt political statements or engage in activism."

It is common to find people with connections to mainland China in many U.S. Taiwanese churches, said Daisy Tsai, associate professor of the Old Testament at Logos Evangelical Seminary in El Monte, California.

The two groups may hold different political beliefs, but their Christian faith binds them, she said.

"People generally mingle and get along," said Tsai, who is Taiwanese American. "In many churches, there is an unwritten rule that we don't discuss politics. But sometimes, those discussions could spill over to social media and turn into debates."

Al Hsu, a second-generation Taiwanese American who lives in the Chicago area, agrees that church is not necessarily a place where people talk politics.

"But it is a place where we foster a sense of our peoplehood, our heritage and national identity," he said.

Hsu said his mother holds dual citizenship and travels to Taiwan to vote because she cares about the country's future.

"The church has been a safe place for the older generation to talk with others who share those concerns," he said. "For someone to come into such a sacred space and target our amahs and agongs (grandmothers and grandfathers) -- to attack the elderly whom we hold in such reverence -- is an attack on our entire community." 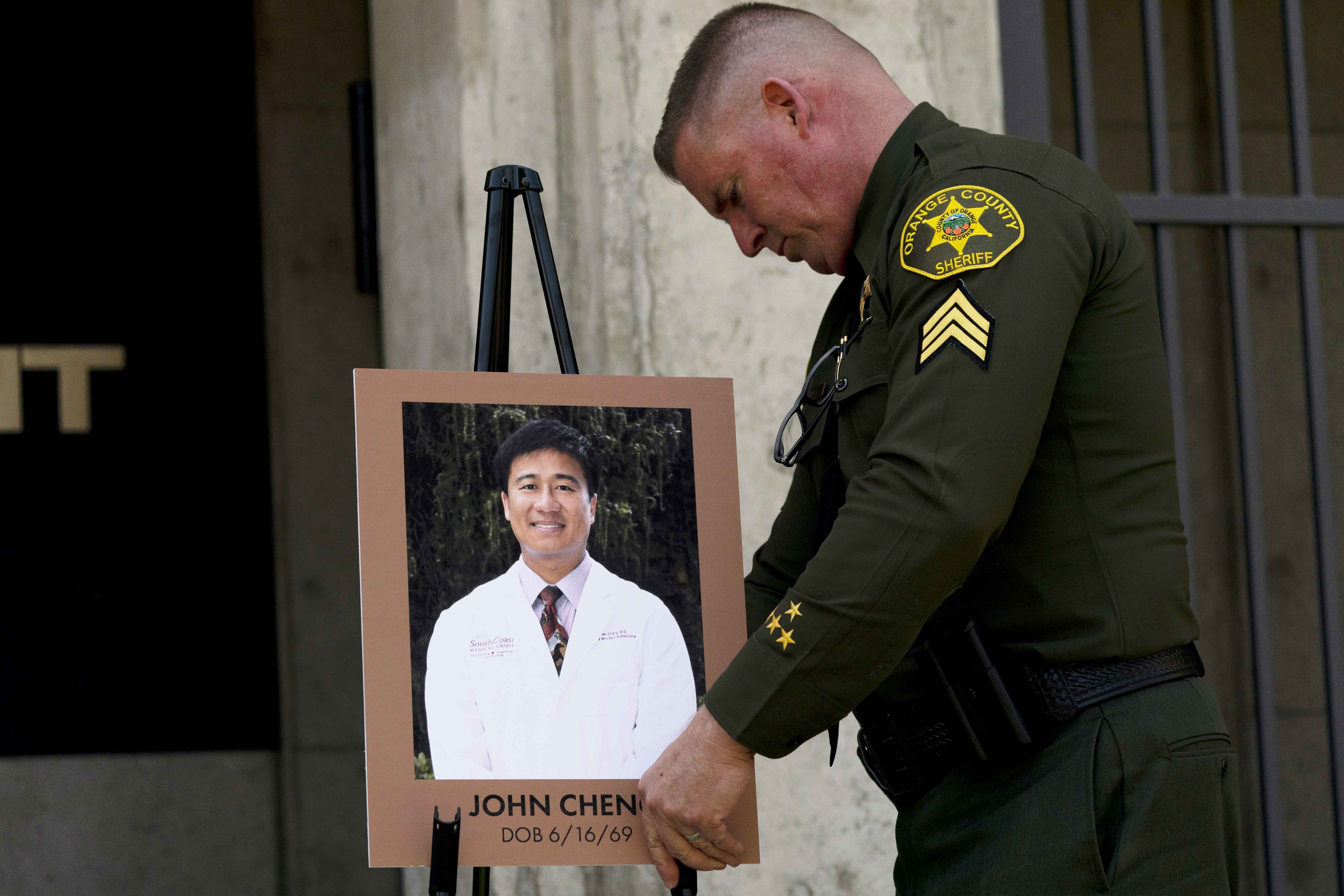 FILE - Orange County Sheriff's Sgt. Scott Steinle displays a photo of Dr. John Cheng, a 52-year-old victim who was killed in Sunday's shooting at Geneva Presbyterian Church, during a news conference in Santa Ana, Calif., on May 16, 2022. Officials in California's Orange County are still trying to determine why a gunman opened fire in the Taiwanese Presbyterian church in Laguna Woods. (AP Photo/Jae C. Hong, File) 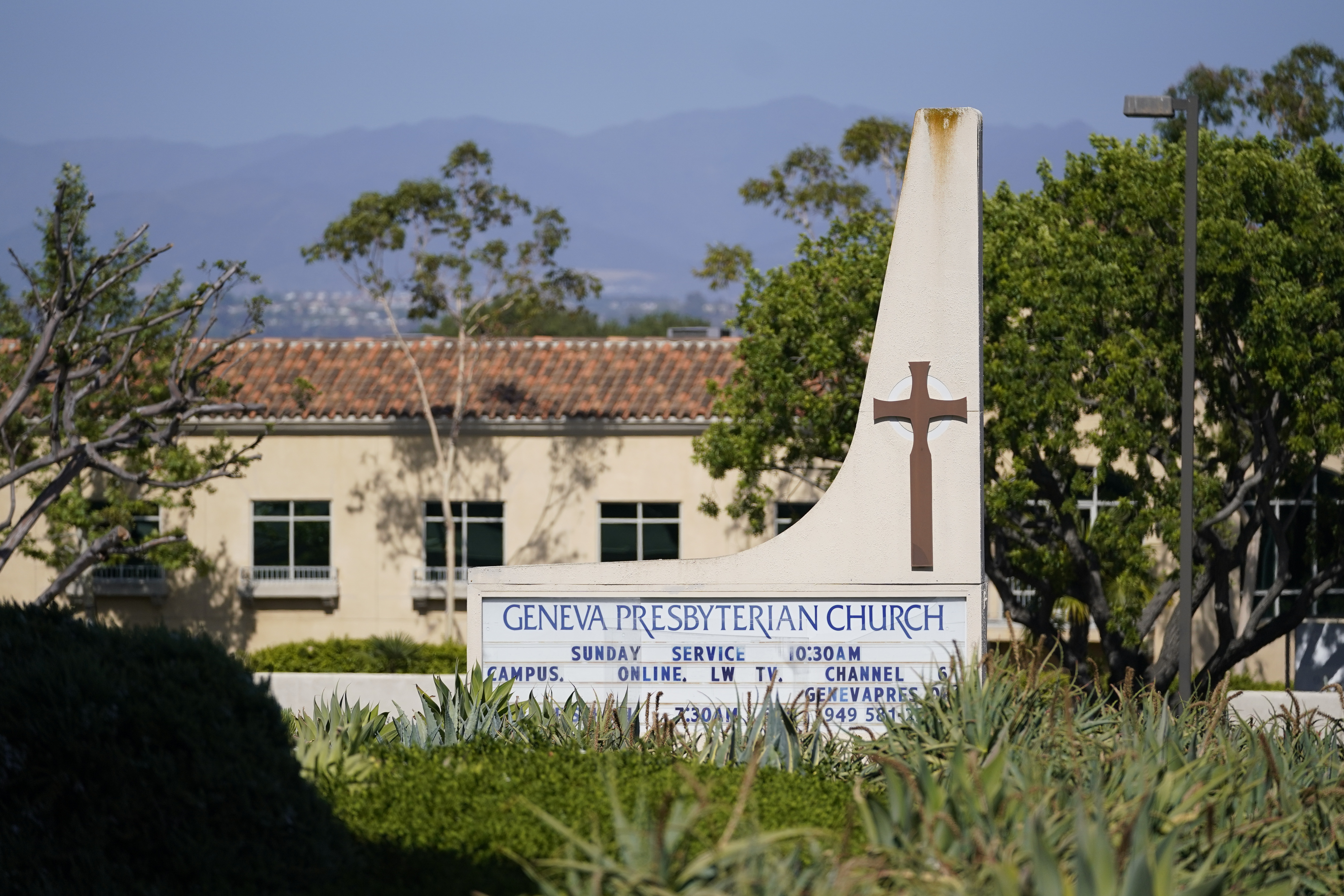 FILE - Geneva Presbyterian Church, as seen on May 17, 2022, in Laguna Woods, Calif., where a shooting at the church on Sunday left one dead and five injured. Officials in California's Orange County are still trying to determine why a gunman opened fire in the church. (AP Photo/Ashley Landis, File) 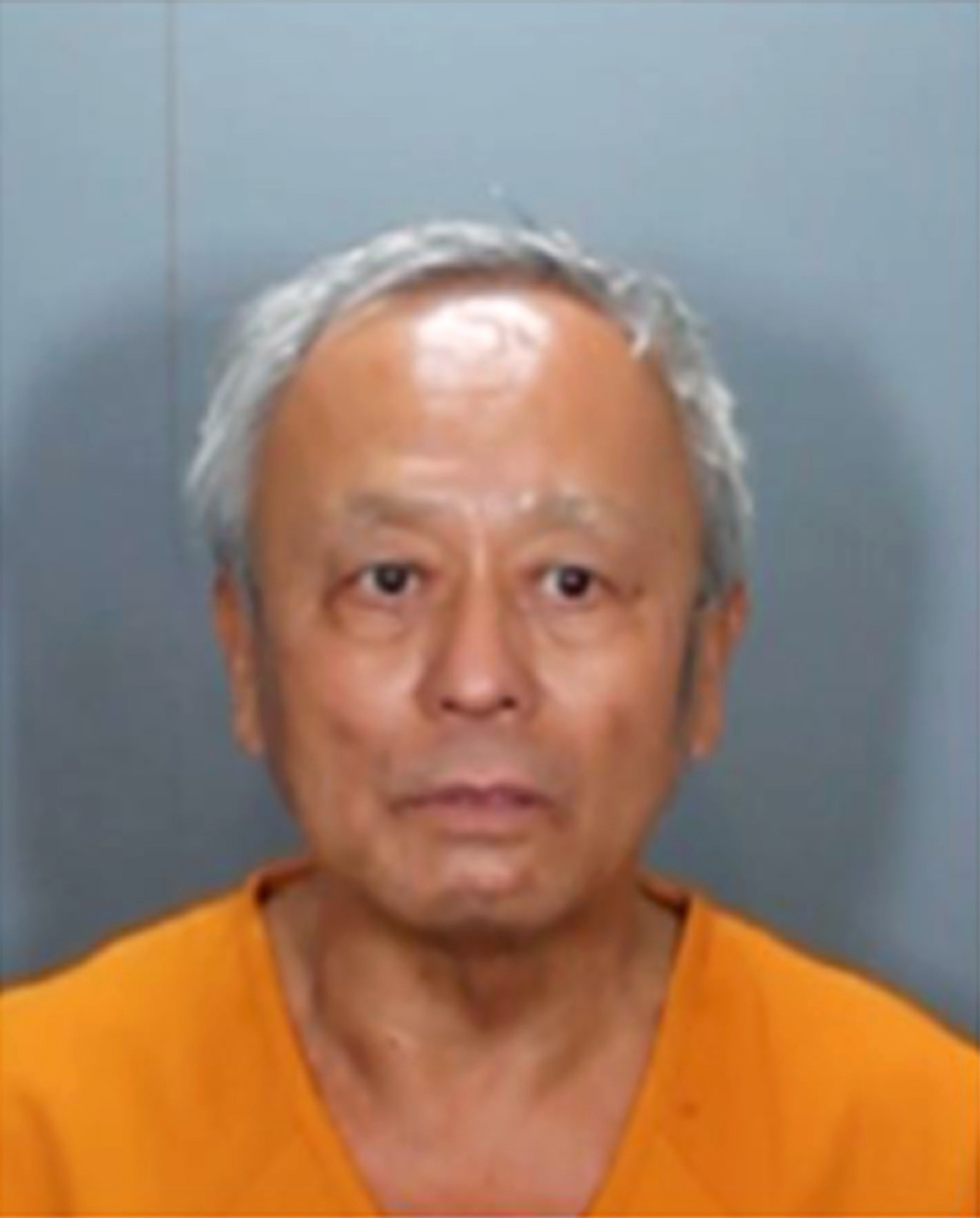 FILE - In this photo released May 16, 2022, by the Orange County Sheriff's Department is David Chou. Authorities said Chou, the gunman in Sunday's deadly attack at a Southern California church, was a Chinese immigrant motivated by hate for Taiwanese people. Chou was booked on one count of murder and five counts of attempted murder. (Orange County Sheriff's Department via AP, File)