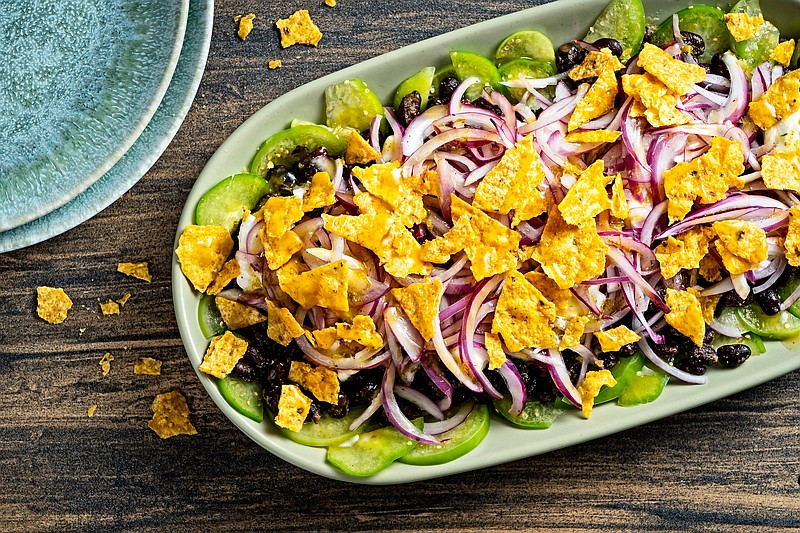 Cumin Beans With Tomatillo and Chips. MUST CREDIT: Photo for The Washington Post by Scott Suchman

People often ask me: How do you come up with meals that are so simple to make yet so enjoyable to eat? The real answer is I still cook like a college kid.

Despite impromptu lessons from parents and cooking shows babbling on the television, the first time many of us learn to cook is once we leave home, whether for college or to a new city for that first job. The goal of those meals is to eat well, simply and quickly (turns out figuring out how to be an adult takes up a lot of time!).

I grew up with a mom who was always cooking, always sticking a cookbook under my nose, and always putting up with my kitchen "experiments," but it wasn't until I went to college in Berkeley, Calif., that I wasn't just cooking for fun but for sustenance, too.

Berkeley is a culinary mecca with farmers markets, abundant produce at supermarkets and great restaurants, but even so my cooking was hampered by limitations, namely time, knowledge, budget, tools and energy.

Even now, after working as a recipe developer for nearly a decade, there are restraints in play - we have lives happening, after all. Of the many lessons learned in college, here are a few principles that still guide me in the kitchen, and helped me dream up 150 dinners using fewer than 10 ingredients and 45 minutes for my first cookbook, "I Dream of Dinner (so You Don't Have To.)"

My thriftiness and schedule in college meant I couldn't build meals around the seasons' best from the farmers market, like the food writers tell you to. Instead, I depended on a few ingredients that'd last a while and were delicious year-round. That meant canned goods and grains, yes, but also fresh ingredients like kale, cabbage, celery, scallions, ginger, cucumbers, lemons and limes. If you're limited to a few ingredients, you start to know them well, understand their traits, and get more comfortable with using them - even without a recipe.

Many recipes will give preparation instructions in the ingredient list, like "1 bunch kale, de-stemmed and chopped." Cooking videos will show these ingredients in a bunch of little bowls. But why would I wash all those bowls if I could just ... not? Also, who has so many little bowls? I didn't in college and still don't.

Instead, I would chop ingredients as I needed them, because that's how I saw my mom make dinner. This subtle switch makes the most of your time and counter space. In the Cumin Beans With Tomatillo and Chips, for example, you're instructed to cut the tomatillos, then move them to a serving platter, their final destination. On the now-empty cutting board, cut the red onion. Then, go ahead and season the red onion with salt right on the cutting board. In a cooking video, those two moves might've required two additional bowls.

There wasn't space for those many-piece cooking sets you're told you need to stock a kitchen. Instead, I bought tools I needed and didn't have a hack for. My egg-frying pan, for example, was used multiple times a week until just a few months ago, when my boyfriend (kindly) told me what I already knew: It was time for a new one. I didn't have a rice cooker, and steaming rice on the stovetop never came out quite right, but I had a large pot, and could I boil rice like pasta (see next item)?

Recognize that limits in knowledge are okay

You can never know everything about cooking; instead of worrying about what you don't know, focus on what you like and feel comfortable making. I was afraid of harming myself and housemates with raw chicken, so I embraced proteins that didn't have to be cooked to a specific temperature, like tempeh, tofu, beans and cured meats like salami. The orange-glazed tempeh from Heidi Swanson's 101 Cookbooks played on repeat, as did pita pockets with hummus and crunchy vegetables.

Rice tested me: Regardless of the rice to water ratio I tried, it never came out correctly on the stovetop. But I really, really wanted rice, so I tried boiling it in a large pot of salted water, then draining it, just like pasta. It works! There's a whole section of the book devoted to this method for cooking grains; it's a consistent way to get individual, not-clumpy grains, which are great for salads and stir-fries. (If you want a fluffier rice, after draining, return it to the pot, cover, and let it steam for a few minutes.)

Cook what is filling, delicious and quick

The goal of college cooking was to feed yourself and whoever was hanging around - quickly. It didn't have to be beautiful, it didn't have to be impressive. It was food that felt good to cook and eat. That's what I did then and continue to do now.

With Tomatillo and Chips

This vegetarian main dish is like if a seven-layer dip got a makeover in the produce aisle. The first layer is raw tomatillos, which are tart like a green apple and juicy like a tomato (you could also swap in sliced tomatoes, cucumbers, iceberg lettuce or cabbage). Then comes spiced black beans, dollops of tangy sour cream, red onions, a spicy lime dressing and heaps of crumbled tortilla chips. For more layers, add cilantro, scallions, avocado, crumbled bacon, pickled jalapeños, Cotija and/or Fritos.

Storage Notes: Refrigerate without the chips for up to 3 days.

One (15-ounce) can black beans, drained and rinsed

One (3-ounce) bag tortilla chips, plus more as needed

Scatter the tomatillos on a medium serving platter and sprinkle lightly with the salt. In a medium bowl, sprinkle the onions with a pinch of salt and pepper, and toss with your hands until the slices start to wilt, 1 to 2 minutes.

In a small bowl, whisk together 1/4 cup of olive oil, the zest and juice of the lime and hot sauce. Season to taste with salt and pepper, taste, and add more hot sauce, salt and/or pepper, if desired. Pour a quarter of the dressing over the tomatillos.

In a medium skillet over medium heat, heat the remaining 2 tablespoons of olive oil until shimmering. Add the beans and cumin and cook, stirring, until the beans are warm and fragrant, 3 to 4 minutes. Season to taste with salt and pepper, and remove from the heat.

Spoon the beans over the tomatillos, followed by about a dozen teaspoon-size dollops of sour cream. Top with the red onion, then spoon the rest of the dressing over. Crumble a couple handfuls of tortilla chips on top, adding more if desired. If you want it spicy, add more hot sauce.

Serve family-style, with additional chips on the side, if needed. 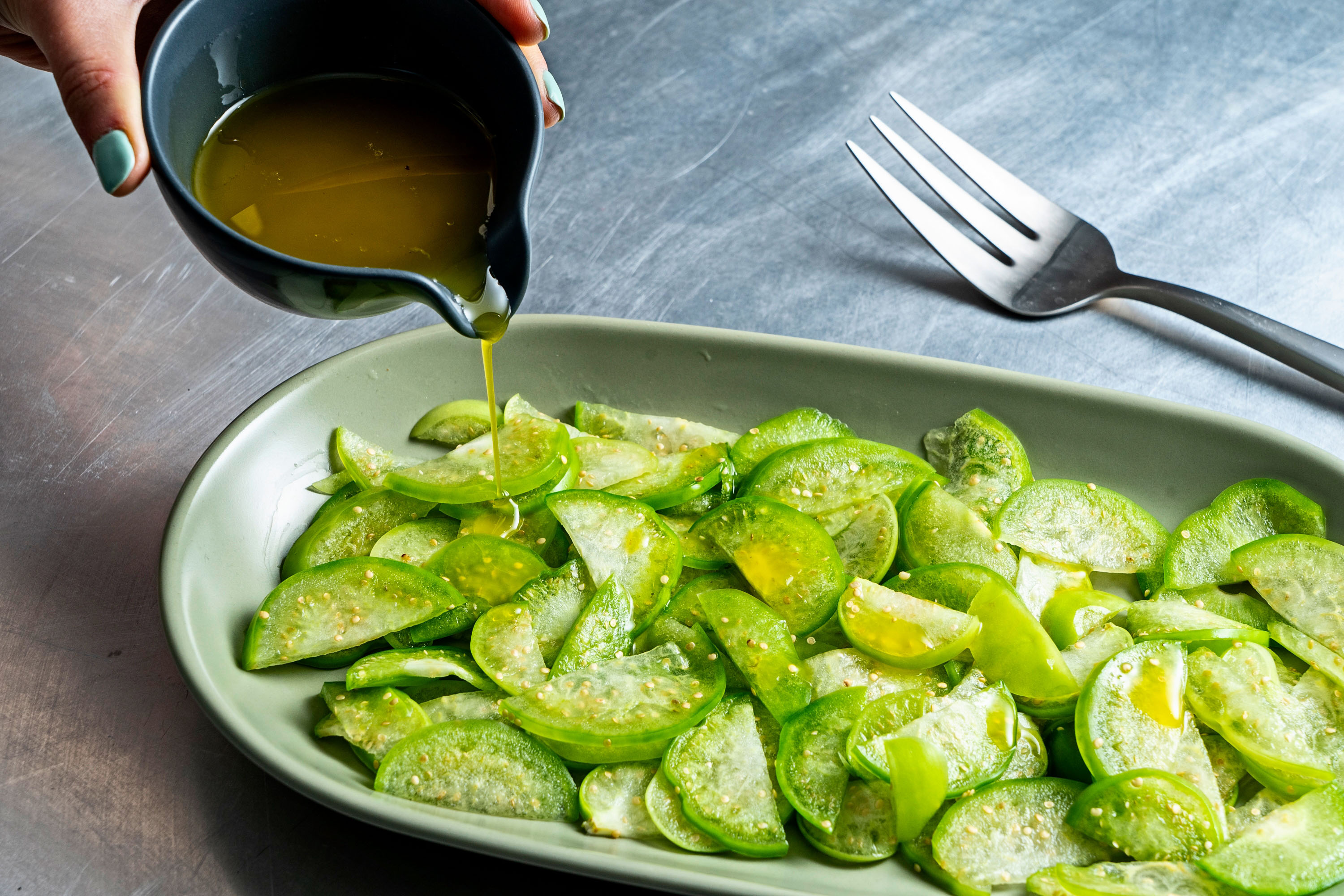 Tomatillos are lightly dressed for Cumin Beans With Tomatillo and Chips. MUST CREDIT: Photo for The Washington Post by Scott Suchman

Print Headline: Cook like a college kid with a bean dip recipe and some timeless tips