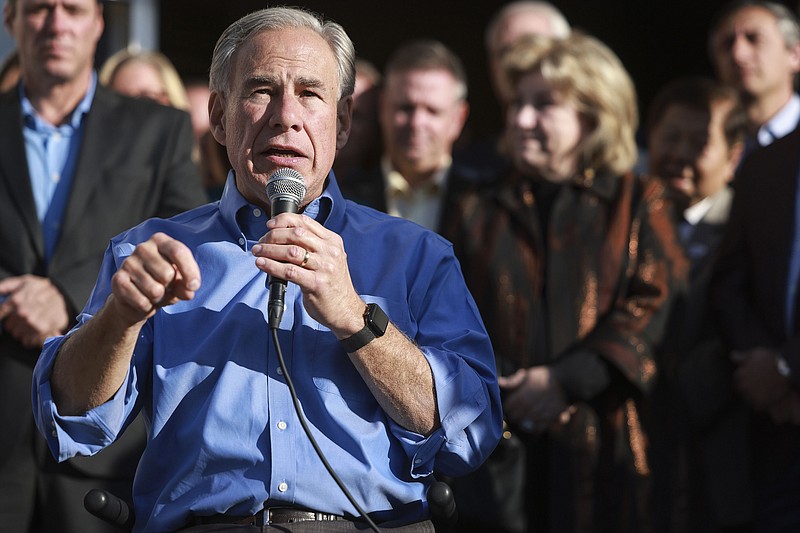 DALLAS -- Emboldened by another sweep of statewide offices and firm control of the Legislature, Texas Republicans are poised to implement right-of-center policies designed to keep the Lone Star State a bastion of Trump-era conservatism.

Gov. Greg Abbott, who on Tuesday easily defeated Democrat Beto O'Rourke for a third term, has already offered a slew of conservative proposals, including laws to strengthen the influence parents have in public education, policies that allow students to choose public school alternatives, more laws to stifle the teaching of "critical race theory" and substantial property tax reductions that could include a taxpayer Bill of Rights.

Abbott's agenda comes as Lt. Gov. Dan Patrick, the president of the Senate who also won reelection Tuesday, has pledged to ban gender modification surgeries and is expected to push other policies aimed at the transgender community. Republicans could also add prohibitions on travel outside the state to have abortions.

Abbott's political team said the governor will capitalize on the GOP victories.

"He's really looking forward to having a solid majority in the Legislature who support him and support his ideas," said Dave Carney, Abbott's chief political strategist. "He's building the conservative movement across the state."

Political experts say Tuesday's election gives the GOP a mandate to continue to shape Texas as a bastion of conservatism.

"The larger the Republican margin of victory statewide, the less restraint we are going to see from the most conservative wing of the Republican Party in pushing forward its legislative agenda," said Rice University political scientist Mark Jones, who publishes ideology rankings of Texas legislators. "And that margin of victory means the pragmatic or centrist Republicans will be less interested in restraining the right wing."

Longtime Austin GOP lobbyist Bill Miller said Republicans would approve some legislation that will be described as red meat for the most conservative Texas voters. But he said there would be more willingness by the GOP to work on other topics than in the 2021 session. That's when many Republicans in the Legislature were accused of punishing Democrats for aggressively challenging GOP incumbents in an unsuccessful move to seize control of the Texas House.

"They will exert their authority and power in the ways that they choose," he said. "There will be plenty of steak to go around for sure, but I don't think it will be an exclusive paleo diet."

Conservative political consultant Matthew Langston said most of the issues pushed by Republicans lawmakers are mislabeled as far right by pundits and the media.

"While many of these issues may be embraced by the far right, they are top of mind for Texas voters," he said. "All of the Republican elected officials will have confidence that they are passing laws favored by the people."

Still firmly in the minority, Democrats are bracing for the worst.

"It's going to be a long and hard legislative session," said state Sen. Royce West, D-Dallas.

Last year, Abbott signed into law numerous pieces of legislation that appeal to the state's most conservative voters, including a near total ban on abortion, with no exceptions for rape or incest.

After former President Donald Trump insisted without proof that the 2021 presidential election was stolen from him, Abbott signed into law a controversial elections bill. The sweeping law has tighter requirements for mail-in voting, bans drive-through and 24-hour voting and gives partisan poll watchers more freedom at polling places. Critics said the law discriminates against communities of color. Supporters argue the measures are designed to prevent cheating.

The Legislature also approved legislation to curb efforts to reform the cash bail system. The law prohibits the release of anyone on a personal bond who is charged with a violent crime. Critics say the law discriminates against the poor. Lawmakers also approved measures to deal with censorship by social media companies, which was a response to Trump being kicked off several platforms.

The 2023 legislative session, which starts in January, could bring more acrimony.

Some proposals Republicans are considering are a continuation of the 2021 legislative session.

Patrick, for instance, wants to stiffen penalties for voter fraud. He also wants to ban taxpayer-funded lobbyists, who are typically used by local governments to push their agendas with lawmakers.

State Rep. Matt Shaheen, a Plano Republican and one of the most conservative members of the House, said parental rights will be one of the biggest issues, with lawmakers looking to remove "pornography" and deal with the "sexualization of children and drag shows. " He added that Republicans would "definitely tackle gender modification surgeries."

"A lot of people were disappointed we didn't pass it last session," he said.

Shaheen said lawmakers would move to help mothers who otherwise would have had an abortion.

"We're going to have a lot of little babies that are going to survive now," Shaheen said. "You're going to see the Republican Party reallocate health care dollars to help mom and to help little baby."

Political and policy observers will also watch to see if Abbott backs some proposals that have seemed elusive under GOP rule. They include proposals for casino gambling and the expansion of medical marijuana for medicinal purposes.

Given the election results, Abbott and Republicans will decide what to do with the state's $27 billion revenue surplus. The governor has already signaled he wants half of it used for property tax reduction.

"The contract with seniors, parental rights, the taxpayer protection, all those kinds of things fit nicely with the majority of Texans," Carney said. "It's part of the aspirational goals for the next session."

After Tuesday's setback, Democrats are mobilizing to stop efforts to pass laws related to school choice.

"At the top of my list of concerns is what state leaders have been saying about implementing school vouchers," said state Rep. Chris Turner, a Grand Prairie Democrat and chairman of the House Democratic Caucus. "That would take money out of our public schools."

Democrats haven't won a statewide race since 1994. And the last time they controlled a branch of government was 2001, when they had a majority in the Texas House.

Turnout for Tuesday's midterm elections was down from 2018, when Democrats flipped 12 seats in the Texas House and beat two GOP congressional incumbents.

"We have the ability in our hands to make change," West said. "The question is whether we get out and vote in order to change the power structure, make it more reflective of the state and do some of the things that we want to get done."

The longtime senator, who in 2020 lost a primary bid for U.S. Senate, said creating an effective message for voters has been a problem. Republicans ran on the economy, border security and crime. Democrats campaigned on abortion rights, fixing the power grid, curbing mass shootings and securing democracy.

"It's really clear that we are not talking to the people and providing the message that they need to hear from Democrats," West said. "Until such time as we do that, and that means not being tied to an ultra-progressive strategy, we're gonna continue to have the same type of issues."

With most of Texas' statewide leaders in their third terms, it's unlikely all of them will be back after four years.

Abbott's win could put him in the conversation for the 2024 GOP presidential ticket, or a Cabinet position if Republicans win the White House. Those scenarios will unfold in the coming weeks as the nation waits to see if Trump makes another bid for the White House. On Monday he hinted at another presidential campaign, saying he would make an announcement Nov. 15.

Abbott has been mentioned as a 2024 presidential contender, and his victory over O'Rourke and Texas' economic standing help him make that case. Attorney General Ken Paxton could be a Senate candidate in 2024, especially if Cruz runs for president.

Other ambitions aside, Abbott could be looking to push policies that will enhance his legacy.

He's been governor during tumultuous times, including the coronavirus pandemic, several mass shootings and the 2021 winter storm that left millions without power and water and killed 246 people.

"He's hoping to get four years where there's not all these terrible things happening," Carney said.

Carney said the governor would continue to fortify the state's power grid, provide funding for transportation needs, develop a workforce that will be ready for new jobs and reduce property taxes.

"We're economically strong," Carney said. "We will continue to be so, and the governor has the ability to do some things that have a long-term impact."

"These elected officials are looking at the end of this career and possibly the start of another, but certainly the end of where they currently are," Miller said. "Whenever that happens, you begin to think about how you will be remembered. Irrespective of party labels, they do think about legacy issues."