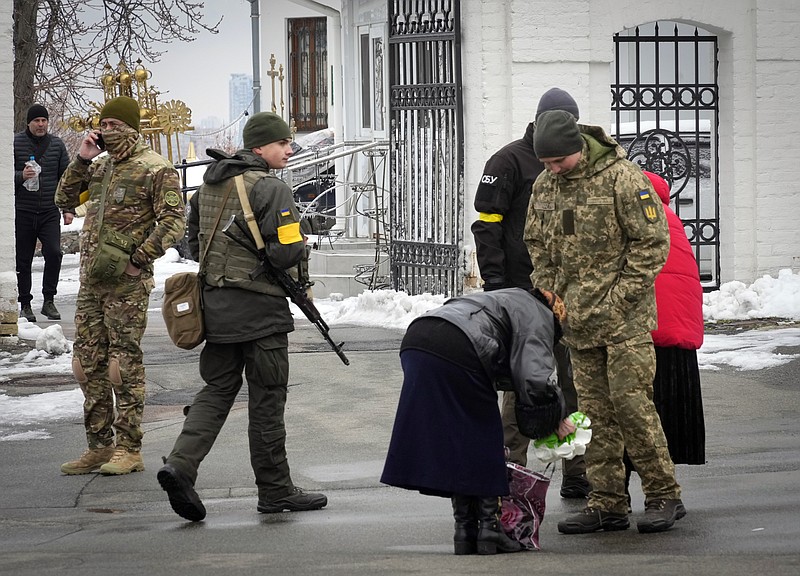 Ukraine's secret service examine belonging of a parishioner at the entrance to the Pechersk Lavra monastic complex in Kyiv, Ukraine, Tuesday, Nov. 22, 2022. Ukraine's counter-intelligence service, police officers and the country's National Guard searched one of the most famous Orthodox Christian sites in the capital, Kyiv, after a priest spoke favorably about Russia &#x2013; Ukraine's invader &#x2013; during a service. (AP Photo/Efrem Lukatsky)

KYIV, Ukraine -- An investigation of a centuries-old monastic complex in Ukraine's capital and other religious sites has underscored Ukrainian authorities' suspicions about some Orthodox Christian clergymen they see as loyal to Russia despite Moscow's nine month-old war on the country.

The search by security service and police personnel at the Pechersk Lavra monastery, one of the most revered Orthodox sites in Kyiv, was unusual but did not happen in isolation.

The Ukrainian counter-intelligence and counter-terrorism service reported Wednesday that its agents searched more than 350 church buildings in all -- also including sites at another monastery and a diocese in the Rivne region, 240 kilometers (150 miles) west of Kyiv.

And the service, known by its Ukrainian initials SBU, accused the bishop of yet another diocese of pro-Moscow activity last week after searching church premises and finding materials that allegedly justified the Russian invasion.

The SBU said the effort is part of its "systematic work to counter the subversive activities of the Russian special services in Ukraine."

Orthodox Christians are the largest religious population in Ukraine. But they have been fractured along lines that echo political tensions over Ukraine's defense of its independence and its Western orientation amid Russia's continued claim to political and spiritual hegemony in the region -- a concept sometimes called the "Russian world."

Many Orthodox leaders have spoken fiercely in favor of Ukrainian independence and denounced the Russian invasion. But the recent searches show that authorities suspect places like Pechersk Lavra -- a UNESCO World Heritage Site revered as the cradle of Orthodox monasticism in that region -- of being nests of pro-Russian sentiment and activity.

That deference has now subsided with many Ukrainians feeling that church officials should "be as equal in front of the law as all of us," said Hovorun, an Orthodox priest and native of Ukraine.

"Some key metropolitans of the Ukrainian church were quite famous and notorious for supporting publicly the 'Russian world' ideology," he said. "It's not a secret."

The SBU said Wednesday that in this week's operations, more than 50 people underwent in-depth "counterintelligence interviews, including using a polygraph." It said they included some Russians and other foreigners, including some without valid passports.

It also said it detected "pro-Russian literature, which is used during studies in seminaries and parish schools, including for propaganda of the 'Russian world'."

But the Rev. Mykolay Danylevich, who has often served as a spokesman for the Ukrainian Orthodox Church disputed Peskov's characterization on the Telegram social media site, asserting that the UOC is not Russian. The UOC declared its independence from Moscow in May.

"The UOC is the same 'Russian Church' as Kherson is a 'subject' of the Russian Federation," he wrote, referring to the city liberated by Ukrainian troops after Russia illegally annexed it.

The SBU operation follows a Nov. 12 service at the Pechersk Lavra complex where a Ukrainian Orthodox priest was filmed talking about the "awakening" of Russia. Songs praising the "Russian world" were sung, it said.

"Those who, in the conditions of a full-scale war unleashed by Russia against Ukraine, are waiting for the 'awakening of Mother Rus' should understand that this harms the security and interests of Ukraine and our citizens. And we will not allow such manifestations," said the SBU's leader, Vasyl Maliuk.

Separately, the SBU said last week that it had exposed "subversive activities" by Metropolitan Jonathan of the diocese of Tulchin and Bratslav in western Ukraine.

The service alleged that he stored printed materials justifying Russia's invasion in his church and planned to distribute them. It said the material called for "seizure of state power and changing of the borders of our country."

Metropolitan Jonathan denied the allegations, saying they "do not represent the truth."

The SBU said on its Facebook page it is following legal procedures. It said it "adheres to the principle of impartiality to the activities of any religious creed and respects the right of every citizen to freedom of secularism and religion."

The "Russian world" term serves as a flashpoint in a culture war underlying the shooting war. It portrays Moscow as the protector and cultivator of a shared, millennium-old Orthodox Christian culture across Russia, Ukraine and Belarus.

Moscow Patriarch Kirill, head of the Russian Orthodox Church, has justified the war as part of a "metaphysical struggle," with Russia acting to protect Ukraine from the liberal encroachment of the West, manifested in such things as gay pride parades.

Orthodoxy in Ukraine is divided.

The historic branch of the Ukrainian Orthodox Church has officially been loyal to the Russian Orthodox Church since the 17th century. But after breakaway groups organized under the name Orthodox Church of Ukraine, they received recognition in 2019 as an independent church by the Ecumenical Patriarch of Constantinople. The Russian church fiercely rejects that move as illegitimate.

And three months after the war began, the part of the Ukrainian Orthodox Church that had remained loyal to Moscow then declared its own independence.

But that church's relationship to Moscow remains ambiguous.

"Its status is now unclear," added John Burgess, author of "Holy Rus': The Rebirth of Orthodoxy in the New Russia" and professor at Pittsburgh Theological Seminary.

"There's some division within that church," with priests and other leaders "that are very vocally pro-Moscow," he said. But in other dioceses, priests are no longer mentioning Kirill by name in public prayers -- a ritually potent snub in the Orthodox tradition, where such prayers are routine as an expression of church unity.

Ukrainians' search of Pechersk Lavra is sensitive. Dating to the 11th century, it includes a labyrinth of caves, tombs of saints and Baroque churches, according to UNESCO.

"From an American pluralism point of view, you'd say, 'Really? You'd raid a church because somebody sang a song?'" Burgess said. "But it's wartime. There's so much anger toward Russia and so much anger with anything that seems to be associated with Russia. We'll see if the security forces really came up with anything." 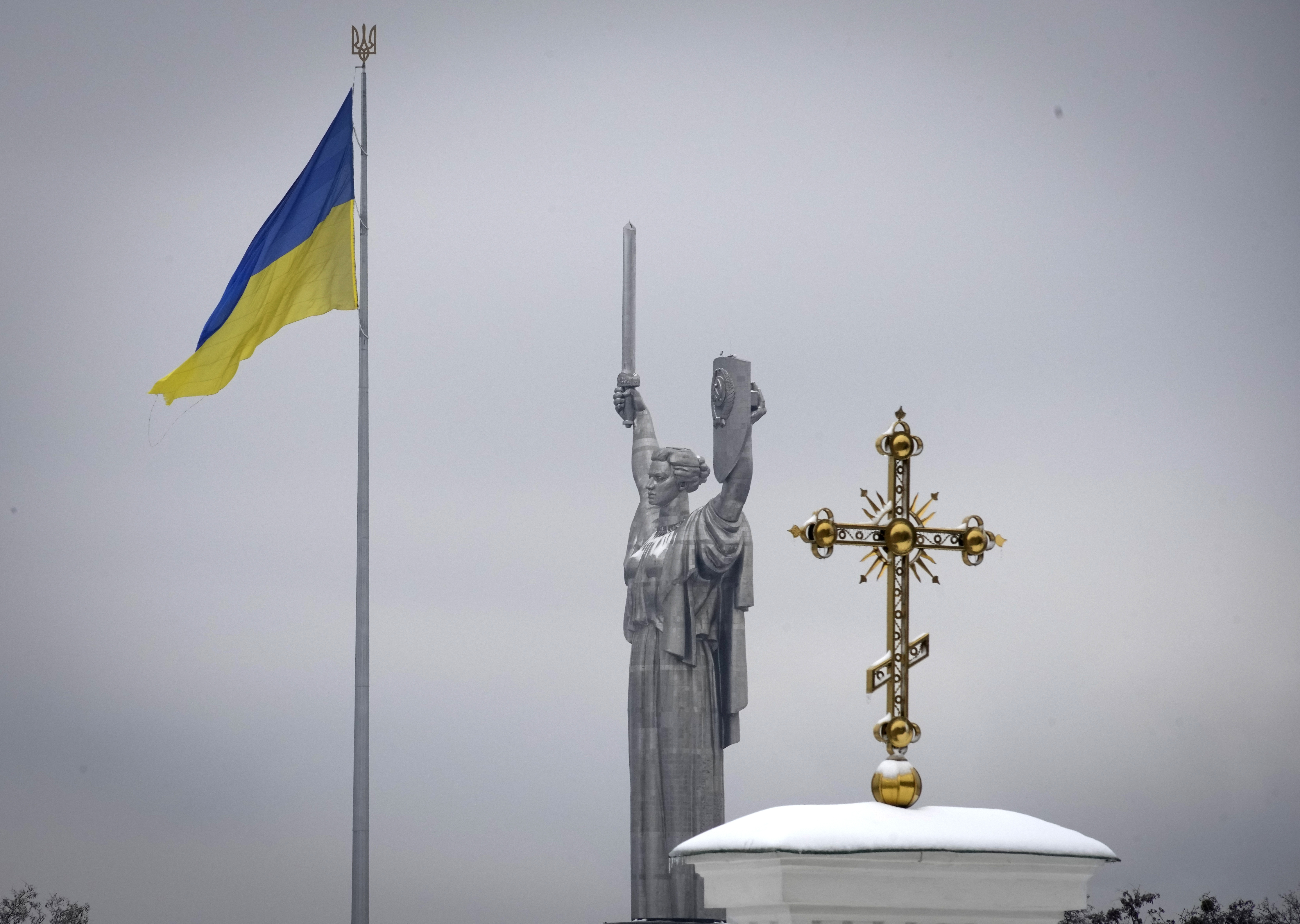 A cross of the Pechersk Lavra monastic complex is seen against background of the Ukrainian national flag and the Motherland Monument in Kyiv, Ukraine, Tuesday, Nov. 22, 2022. Ukraine's counter-intelligence service, police officers and the country's National Guard searched one of the most famous Orthodox Christian sites in the capital, Kyiv, after a priest spoke favorably about Russia – Ukraine's invader – during a service. (AP Photo/Efrem Lukatsky) 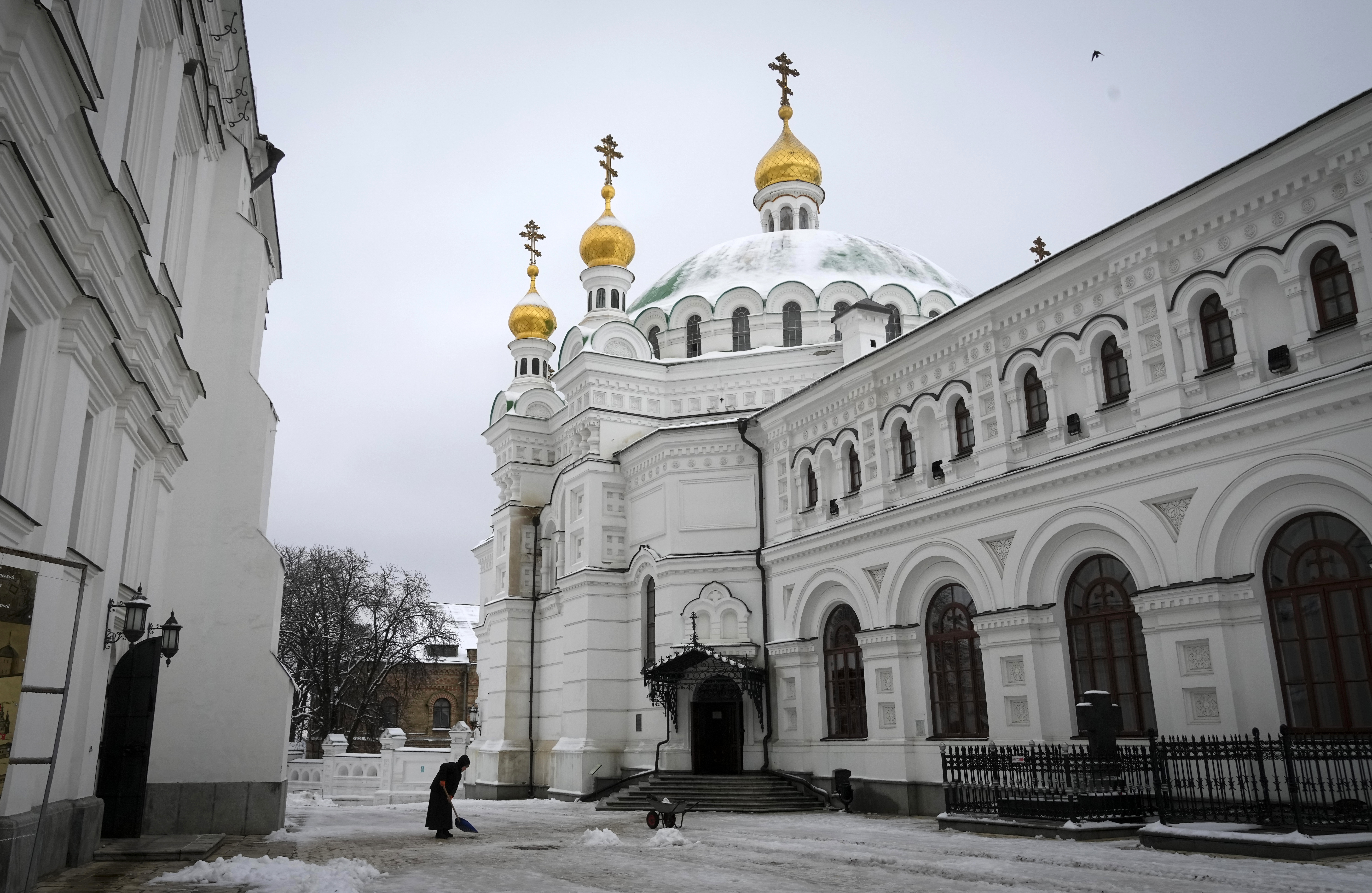 A woman cleans the snow in the Pechersk Lavra monastic complex in Kyiv, Ukraine, Tuesday, Nov. 22, 2022. Ukraine's counter-intelligence service, police officers and the country's National Guard searched one of the most famous Orthodox Christian sites in the capital, Kyiv, after a priest spoke favorably about Russia – Ukraine's invader – during a service. (AP Photo/Efrem Lukatsky)