GUEST COLUMNIST | Could it be the Fouke Monster? 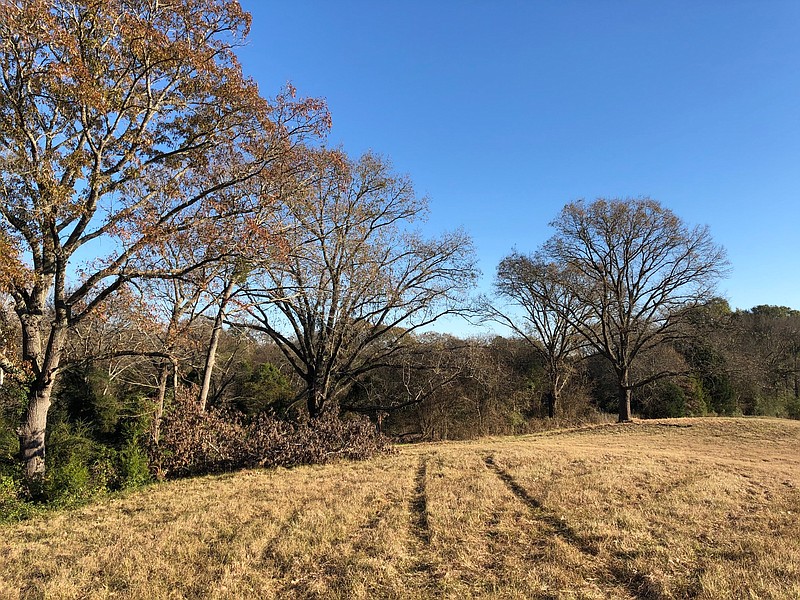 As a child, columnist John Moore thought that the Fouke Monster was behind every Arkansas tree. (Photo by John Moore)

When I was a kid in the early 1970s, the Fouke Monster was around every corner. At least, that was how I saw things as a 10-year-old.

For those who aren't familiar with this Sasquatch-like creature, the Fouke Monster allegedly roamed (some say, still roams) the river bottoms and woods in and around Fouke, Arkansas, which is about 40 miles southeast of where I grew up in Ashdown.

Editor's Note: This column originally was published on Oct. 8, 2017.

At the time, several newspapers were reporting about people who had not only seen a hairy, 7-foot-tall creature in and around the corner of Southwest Arkansas that borders Louisiana, but one family also claimed that the monster had reached through a window screen in their house and tried to get them.

Between the monsters that I was certain lived under my bed, and the Fouke Monster potentially putting his large, hairy hand and arm through my window, suffice it to say, my sleep was filled with less-than-pleasant dreams.

Many places in the country, and in other parts of the world for that matter, have local legends of monsters. New Jersey has the Jersey Devil, which witnesses describe as a horse-like creature with wings. Maine has Cassie, the giant sea serpent. West Virginia has the Mothman. And Arizona claims to have giant flying creatures called Thunderbirds, which have oral legends dating back to Native Americans in that area.

The Fouke Monster, also called the Boggy Creek Monster and Southern Sasquatch, according to some sources, has reported sightings going back to the mid-1800s. But most of the reports of the beast can be traced back to the 1940s.

Rumors of the monster came to a head for me and my classmates in 1972 when there were rumblings on the playground that someone was making a movie about the Fouke Monster.

What was circulating around the swing sets and monkey bars was that the movie would recreate many of the alleged sightings and that we would actually see what the monster looked like.

Well, heck. We were all in.

Even though everyone in my fifth grade class was terrified of the Fouke Monster, but wouldn't admit it, we all had our fifty cents ready in our pants pocket to plunk down at the ticket window at Williams Movie Theater to see the film. We just had to wait patiently for the movie to finish production and come to town.

When The Legend of Boggy Creek finally hit movie theaters, it surprised a lot of people, but especially people in the film industry. According to its Wikipedia page, it has made $25 million on a $160,000 budget. I remember hearing that it held the record for many years as the most profitable independent film in US history.

The movie was directed by a very interesting man from Texarkana named Charles B. Pierce. He is now deceased, but I had the occassion to meet him twice. When I was in Cub Scouts, my troop attended a taping of the local kid's show, The Laugh-A-Lot Club, which Charles hosted on local NBC affiliate KTAL-TV as the persona of Mayor Chuckles. In the early 80s, he contacted me about doing some narration for a film he was working on at the time. During both encounters, he was quite cordial.

He obviously was also quite savvy. He knew how to turn a little bit of money into a lot of money.

That movie launched the Fouke Monster from local lore to national attention. Not surprisingly, after the movie came out, more and more people came forward to claim that they had evidence of the monster or that they had encountered it.

Local men put together hunting parties to head out and try and bring back the creature. There were even stories of people who were charged with filing false reports.

The legend of the Fouke Monster carried on for a number of years, mainly through the late 1970s, but those of us who lived in the area eventually moved on and our interest waned.

Obviously, interest in making a buck on the legend has lasted decades, as the last two movies mentioned were released in 2010 and 2011.

Even though reports of the Fouke Monster aren't picked up in the media much these days, the sightings have continued through the years, according to the monster's unofficial website, foukemonster.net. It lists sightings dating back to 1908, with the most recent from May of 2017.

It says: "A man and wife were driving south on I-49 near Boggy Creek at around dusk. As the woman looked towards the northbound lane, she saw a "real tall, hairy human-like figure" standing at the treeline. She became terrified as she looked closer at the huge figure and exclaimed "what is that!?" Her husband was driving and could not look back fast enough to see the figure. The woman does not think it was a person."

I personally have never seen the Fouke Monster and I am a lot less worried about him these days than when I was 10. But, for those of us who grew up in the early 70s in Southwest Arkansas, he will forever be part of our childhood.

The Legend of Boggy Creek is available on DVD, but watch it at your own risk. And be sure to check under your bed before you turn in for the night.

John's latest book, "Puns for Groan People," and volumes 1 and 2 of his series "Write of Passage: A Southerner's View of Then and Now" are available on his website, TheCountryWriter.com, where you can also send him a message and hear his weekly podcast. ©2022 John Moore

Print Headline: GUEST COLUMNIST | Could it be the Fouke Monster?