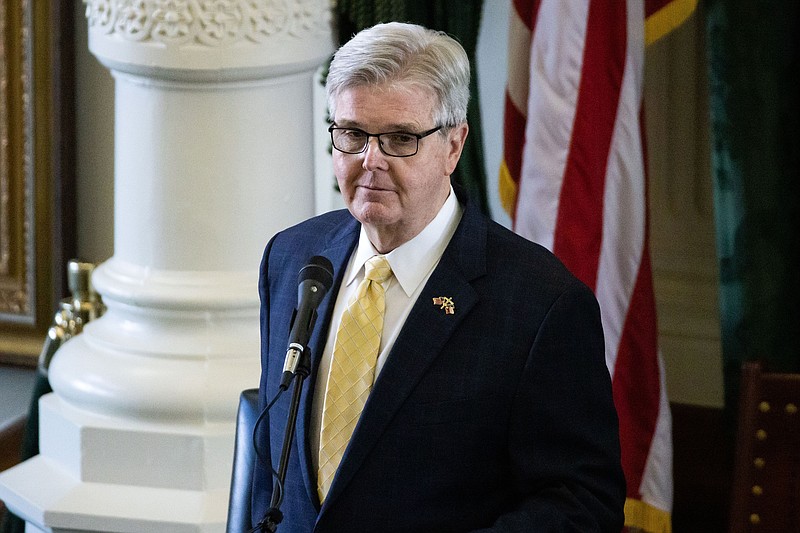 Lt. Gov. Dan Patrick presides over the state Senate on the second day of the 87th Texas legislature on Jan. 13, 2021, at the Capitol in Austin. (Lynda M. Gonzalez/The Dallas Morning News/TNS)

DALLAS -- Conservative Texas pastors and lawmakers have their eyes set on school vouchers to fight the "miseducation" of students ahead of the November elections and the upcoming legislative session.

"After COVID and after (critical race theory) and after pornographic books in libraries, parents deserve choices," Lt. Gov. Dan Patrick said during a call with about 50 Texas pastors this week.

He and the clergymen, many members of the Texas Pastor Council, want parents to have the right to determine where their children go to school and how their tax dollars are used in education.

"We are educationally in a crisis of change," Paige said. "The pandemic has changed the area of education in the United States of America. My suggestion would be that (Gov. Greg Abbott) assemble a good group of good thinkers and think about where we go from here."

Amid the ongoing education culture wars over what's taught in schools and students falling behind academically after pandemic disruptions, many families want more options and some believe the landscape is ripe for a renewed fight for vouchers or similar efforts that funnel taxpayer money for use on private school education.

"Now that abortion is illegal in Texas, I believe that the greatest injustice in Texas today is that we compel a family to pay taxes for the education of their children to send them to a school that teaches them things that aren't in line with their family's values," Parker.

The Justice Foundation has backed the expansion of school choice, including fighting for open-enrollment charter schools and now by pushing voucher legislation.

Voucher programs historically faced a tough road in Texas, with opposition by both urban Democrats and rural Republicans who don't want to funnel state money away from public schools.

Last month, Abbott continued his push for school choice options during a visit to a Dallas private school. He previously expressed public support for voucher-like programs.

Public school advocates have been bracing for in recent months as Republicans funnel their angst over so-called critical race theory into calls for more "parental empowerment." Among the groups long fighting voucher efforts across the state -- and describing them as "sinful" -- is the Pastors for Texas Children.

The Texas Public Policy Foundation also has been laying the groundwork toward this fight for months, including launching a Parental Empowerment tour around the state, and labeling expanded school choice a top priority for the 2023 legislative session.

Various versions of choice programs are already offered in 32 states and the District of Columbia and Puerto Rico, according to school choice advocacy group EdChoice.

In 1999, under the leadership of then-Gov. Jeb Bush, Florida became the first state to launch a statewide voucher program. Tennessee just launched its program this school year after the effort was tied up in court for years.

Welch said families are "desperate" and called on pastors to support members of their congregation who hope to remove their children from public schools, whether through supporting the fight for vouchers, establishing private church schools, or even allowing families to use church facilities to establish homeschool co-ops.

Patrick said he believed members of all parties could agree that "money should follow the student," but hinted that he anticipated the road to passing a voucher program will be a hard one.