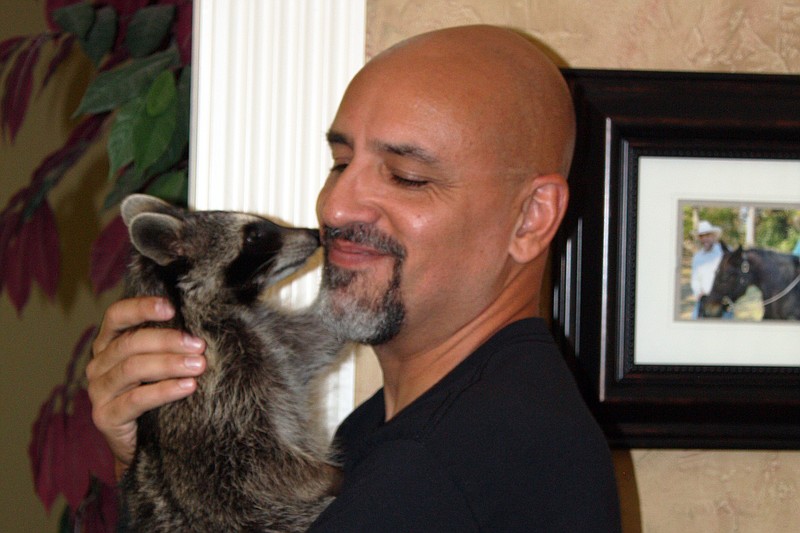 FOUKE, Ark. -- Peggy is trying to claw her way to the top as America's Favorite Pet.

The raccoon is in third place in her group in the preliminary round of voting for a $10,000 prize and a two-page spread in In Touch Weekly magazine.

Owner Billy Smith said Peggy came into his life by chance in mid-May when former girlfriend and wildlife animal rehabilitator Tiffani Williamson asked him to care for a baby raccoon while Williamson took care of her mother during breast cancer treatment.

"By the end of the first night, I was like, there is no way I'm going to be able to give her back now," Smith said. "She had that attachment with me immediately."

Smith said that everywhere he went, the 5-week-old Peggy would cry and scream until she caught up to him. She would climb up Smith's pant leg and nibble on his arm, leaving Smith feeling like her mom.

"I asked Tiffani, and told her it was completely up to her, 'Is there any way you'd allow me to keep her,'" Smith said. "Tiffani said absolutely, so now she's my pet."

Smith said animals have always been a part of his life, including dogs and the occasional cat to help kill scorpions.

"I get attached very easy," Smith admitted. "I lost a weenie dog back in 2001. I had him before I had my first child. I mourned him for the better part of two weeks. When I say a grown man crying every day because of a dog, nobody understands that.

"If we talk long enough, it'll choke me up," Smith said, with a wavering voice. "If something ever happened to Peggy, it'd be rough. I thought she was lost one time. I was freaking out."

Smith said he entered Peggy in the contest for fun and the chance to get Peggy's photo and story in a nationwide magazine.

"I want everybody to understand: Not every coon is meant to be a pet and not everybody is meant to have a coon, but it can happen," Smith said. "I want everyone to see how close she is to me, my son, and she's still close to the girl I used to date because she babysits Peggy."

Smith describes Peggy in her contest profile as "100% Miss Personality," and has the stories to back it up.

"She used to be able to go underneath my bedroom door, but now she's gotten too fat," Smith said. "But one time she climbed under my dresser, got through the back of it and got into the top drawer where my socks were, and that's where I found her one day. Right then I was like, oh my goodness."

"It's kind of funny," Smith said. "She went over to my bare foot and she just started kneading my foot. It's also a good way to calm her down. When she's wound up and playing but won't settle, I just start rubbing her feet and she just lays back."

Smith said he makes sure Peggy gets plenty of supervised outdoor time with her canine siblings, Pugsley and Buddy. Peggy has her own platform that she can climb, along with a small pool of water with her favorite little rock.

"She's a little cautious around the dogs, but she loves Pugsley's curly tail, and they'll just follow each other around," Smith said.

Smith said he and Ian practice being careful with Peggy to avoid startling her and having her scratch one of them.

As Smith shares Peggy's story, the 5-month-old raccoon walks over, stands on her hind legs and paws at Smith's jeans until he picks her up. She then starts to pat Smith on his face and beard, making him laugh.

"I never thought on my own that I would do something like this," Smith said.

The preliminary round of voting for the overall top 15 pets ended Thursday. Should Peggy be among the finalists, voters will have a chance to cast a ballot for her in the final round that starts Sept. 16. 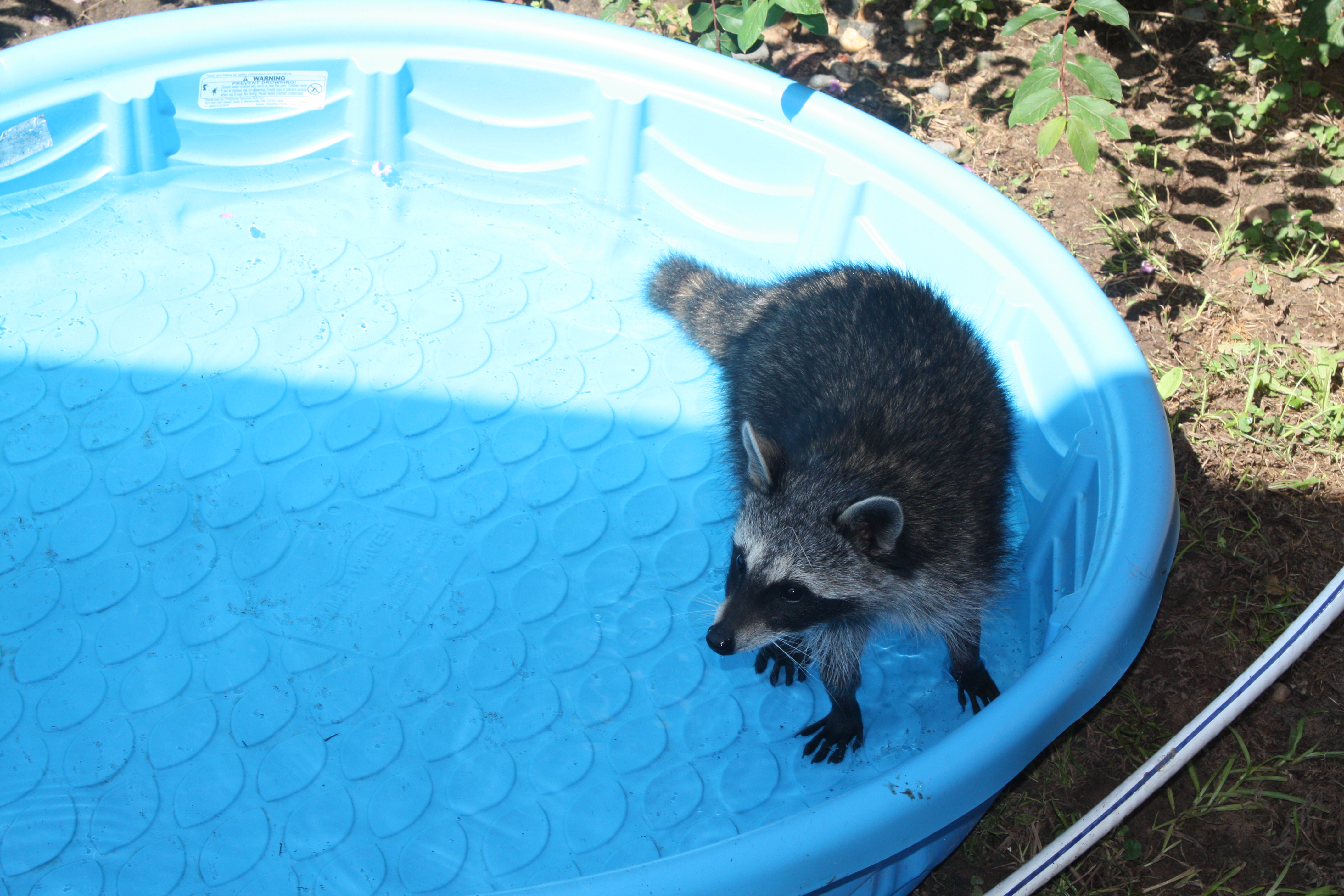 Peggy swims in her small pool in Billy Smith's backyard Thursday, Sept. 8, 2022, in Fouke, Ark. Peggy has her own platform that she can climb, along with a small pool of water with her favorite little rock that she enjoys playing with. (Staff photo by Mallory Wyatt) 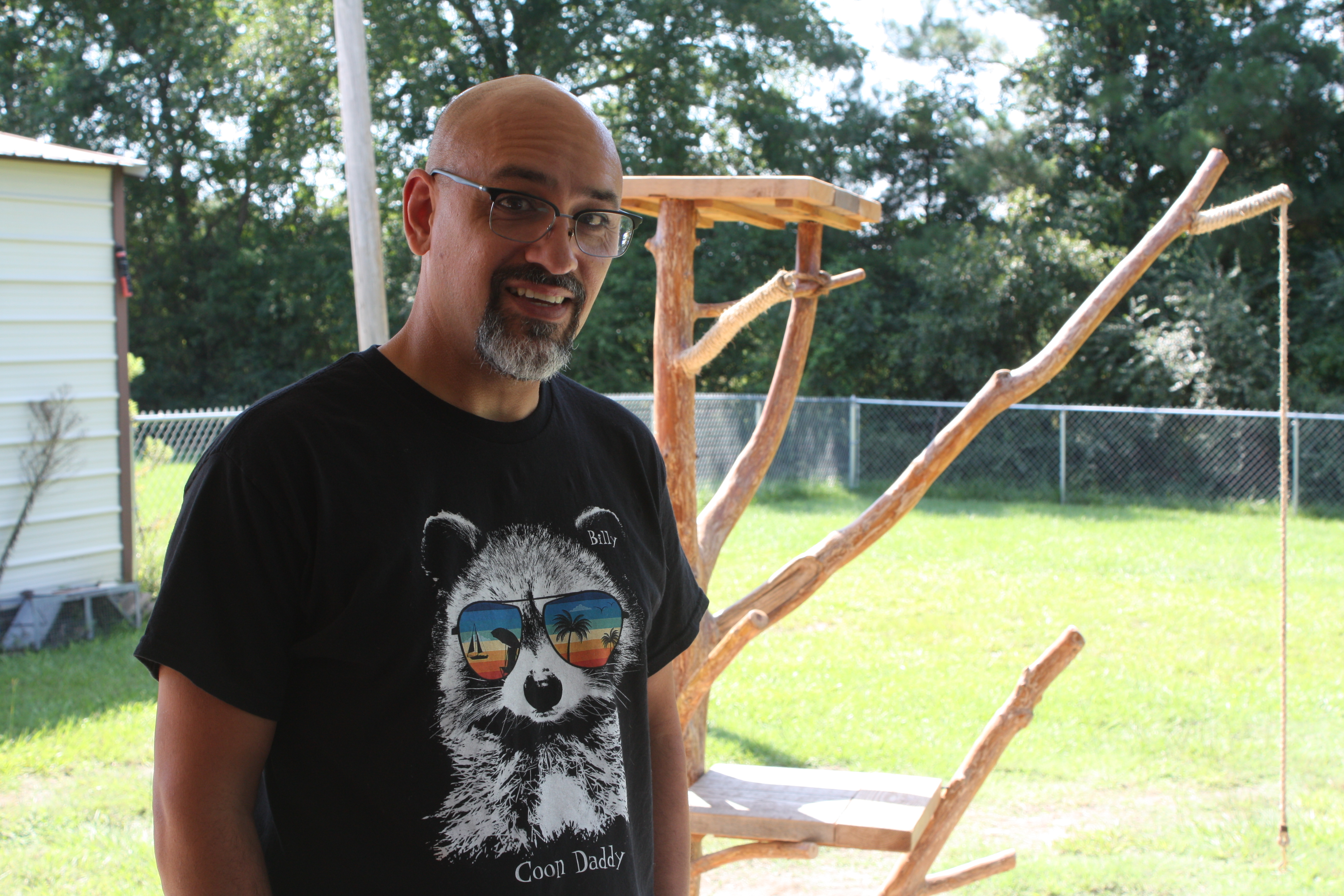 Billy Smith talks about his lifelong affinity for animals in his backyard Thursday, Sept. 8 2022, in Fouke, Ark. In the background is a climbing post for pet raccoon Peggy. (Staff photo by Mallory Wyatt) 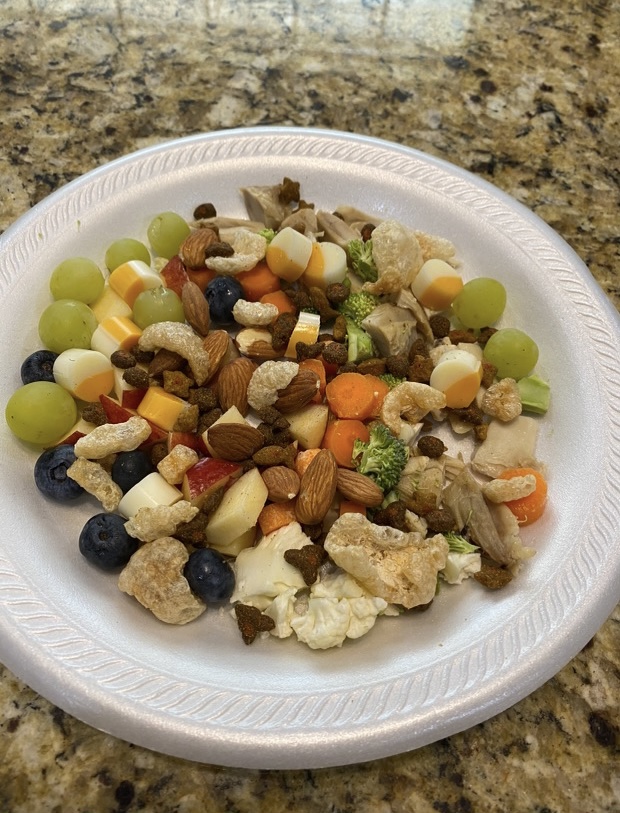 Peggy the raccoon's twice-a-day meal of fresh food includes a mix of rotisserie chicken, carrots, broccoli, cauliflower, cat food and almonds. This plate has grapes, which is one of Peggy's favorite fruits. (Photo by Billy Smith)

Print Headline: WITH POLL | Raccoon owner hopes to make out like a bandit in pet contest