How to cook with barley, farro, wheat berries and more whole grains 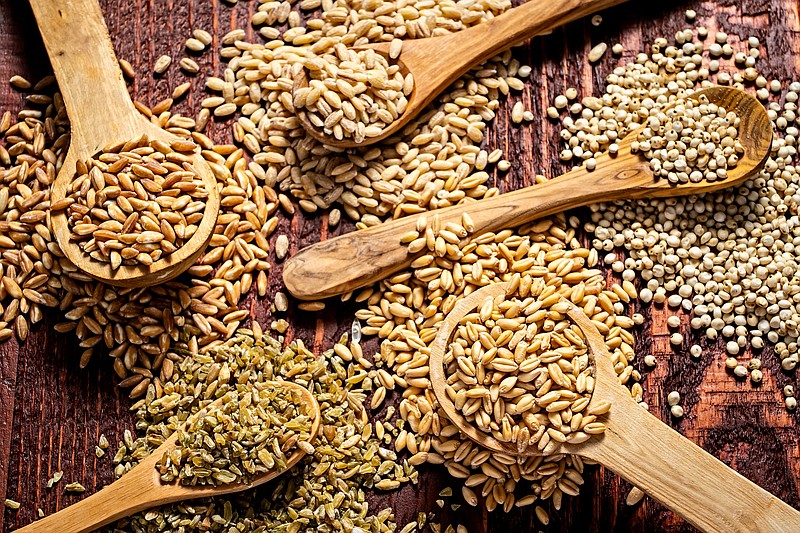 Grains clockwise from the top: Barley, sorghum, wheat berries, freekeh and farro. MUST CREDIT: Photo by Scott Suchman for The Washington Post.

Flour is the most common way we cook with grains. But there are so many types of grains and cooking techniques to explore, especially in savory dishes that will bring fiber, protein and whole-grain goodness to the table.

Grains are right at home in, of course, grain bowls, salads and soups. Once you start playing around with them, you'll realize how tasty and easy it is to enjoy wheat berries, farro, barley, sorghum and more.

Here's an intro to what you need to know.

If you want to experiment with different types, check out a store that sells grains in bulk so you can buy only as much as you need.

If you are particularly interested in whole grains - mostly what I'm going to talk about - read labels. A few grains are processed in such a way that they are not considered whole grains. One example is barley. Like other cereal grains, barley has an inedible hull. If you want whole barley, be sure to buy hull-less (the hull falls off naturally) or hulled (the hull is removed but leaves the bran intact). Pearl barley, which will appear smoother, has had the hull removed in such a way that some of the bran may be removed, so it's no longer whole. Similarly, you can buy farro pearled (no bran), semi-pearled (some bran) and whole.

For longer storage, your best bet is to refrigerate or freeze grain kernels, for 3 to 12 months, Roxana Jullapat says in "Mother Grains." This keeps them from going rancid and safe from pantry pests. If you decide to keep them in the pantry, use sealed, airtight containers.

Plain, cooked grains can be refrigerated in their cooking liquid for up to a week, Emma Zimmerman writes in "The Miller's Daughter."

"Like any agricultural product, grains need to be cleaned," says Robin Asbell in "The New Whole Grains Cookbook." Place in a bowl, cover with 3 inches of water and then massage them to allow the chaff and broken kernels to float to the top. Pour those off with the water, and drain the grains in a fine-mesh strainer.

Like beans, grains can benefit from soaking overnight, though it's not mandatory, Abra Berens says in "Grist." Soaking larger, tougher grains can reduce the cook time by half and ensure even cooking. There's no need to soak quicker-cooking or cracked options, such as freekeh and pearl barley. (Bulgur is often prepared by soaking in boiled water.)

If you buy packaged grains, the label should include cooking instructions (hang on to them if you are repackaging). One method is absorption, in which you add a given ratio of water to grains and cook in a pot until the water has been fully absorbed and the grains are tender. Adding grains to cold liquid before boiling will yield a softer result, while adding them to boiling liquid will make them firmer, Asbell says. You also can add the grains and liquid to a baking dish and slip them in the oven. You can boil grains pasta-style in larger amounts of water, though some nutrients will be poured off. Pressure cooking, such as in an Instant Pot, makes for simple cooking. Use a natural release to let the grains finish steaming as the pot depressurizes, Asbell says.

To cool and dry the grains before storing, frying or using in a cold salad, spread on a clean dish towel. This is a key step before freezing, Berens says, as putting warm grains in a container in the freezer can allow for bacterial growth.

Cooked grains are naturals in warm or cold salads. "My foolproof combo for grain salads is this: a cooked whole grain, pickled vegetables or fruit, cheese, nuts, something green and a bit of salt and pepper," Zimmerman says. Berens's rough formula for farro salads starts with 2 cups of cooked grains, 1/2 cup dressing and as many raw and cooked vegetables as you want. Cool warm grains in the dressing for extra flavor.

Berens encourages home cooks to use wheat berries and other grains in ways you might employ other starches. Try barley in a fried-rice-style dish. Berens likes "risotto-ed" grains, which are cooked as you would rice, gradually adding liquid while stirring to release the starches.

For a fun garnish, Berens suggests pan-frying cooked grains in a "healthy amount" of neutral oil until golden and crisp.

Of course, grains can be cooked in stews and soups.

This list is not exhaustive, but here are descriptions of common grains, with estimated stovetop cook times from Berens. Often they are interchangeable in recipes so long as they are cooked for the right amount of time.

Bulgur: Unlike the others listed here, bulgur is precooked and you are just rehydrating it. It boasts the same nutty, earthy flavors of other wheat items. 10- to 20- minute soak in boiled water.

Freekeh: "Freekeh, like bulgur, is not a grain but rather a coarse meal made of broken wheat," according to Jullapat. Berens notes it has a more vegetal flavor than other wheat products because of the green berries. 20 minutes cracked, 40 minutes whole.

Sorghum: Jullapat says it has "a heartiness similar to steel-cut oats and a nutty, mildly sweet flavor," adding that soaking is highly recommended. 40 minutes.

Wheat berries: This is a pretty broad category, as you will find that species and varietals will differ in shape, size and flavor, though they will all fall "somewhere on the ubiquitous 'nutty' spectrum," Berens says. 45 to 60 minutes.