Savor the end of summer with pisto, a Spanish vegetable stew 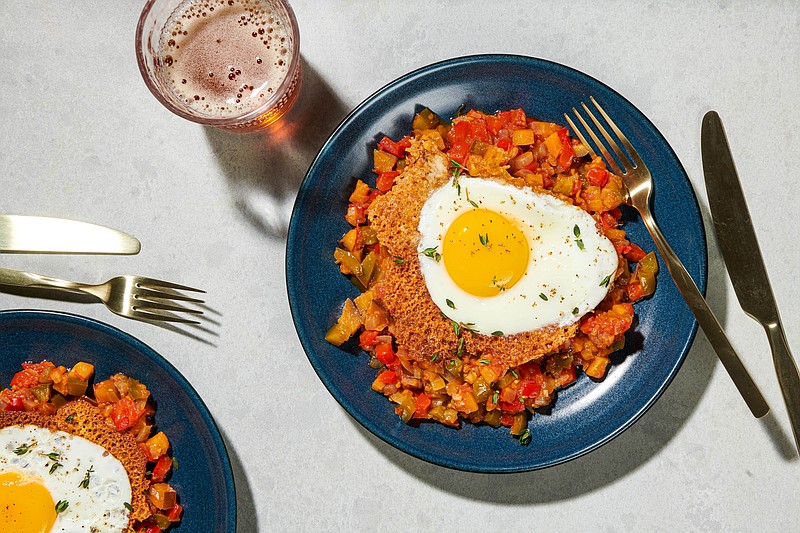 Pisto With Crispy, Cheesy Eggs. MUST CREDIT: Photo by Rey Lopez for The Washington Post.

With August and Labor Day in the rearview mirror, we're clearly cruising into a new season. Still, let's not forget that summer lasts until Sept. 22. There is still time to soak it all in, to put all of summer's best to use, to relish summer on all cylinders. The best way I know how to do that is to make the Spanish vegetable stew known as pisto.

Pisto has roots in ancient preparations, when Spain's countryside - verdant and fruitful - lacked access to fresh water, according to Penelope Casas's "1,000 Spanish Recipes." Instead of boiling vegetables, cooks would simmer and saute them, letting their juices run and bubble until thick. There are many ways to make pisto, but it generally involves onions, zucchini (and/or eggplant) and tomatoes. Some variations are made with potatoes and other roots, leafy greens and a variety of summer squash.

Today's recipe is a fairly traditional adaptation of pisto Manchego, in which onions, garlic, bell peppers, zucchini or eggplant, and tomatoes stew in their own juices (with a small splash of wine), until they're tender and saucy.

There's so much you can do with pisto. It makes a fine pasta sauce, or you could cook it into rice. It's sometimes used to stuff empanadas, and would be great in a Spanish tortilla or frittata. Cover it with cheese and bake it for a gratin. Use it to top yogurt or a creamy cheese, or consider serving it as a side dish with grilled meats or fish.

Here, we're doing as friends of mine in Spain do and topping each serving of pisto with an egg cooked in crispy, fried Manchego cheese. The cheese forms a lacy crust around each sunny-side-up egg, and the pisto does a great job of soaking up the rich yolk. Be sure to serve this with bread on the side, for dragging through all of summer's best flavors.

When summer vegetables are at their peak, do as the Spanish do and make pisto. The saucy stew of onions, garlic, sweet peppers, eggplant, zucchini and tomatoes hails from the regions of Extremadura, Murcia and Castile-La Mancha in Spain's fruitful center. Each region puts its own spin on the dish. In the Manchego version (from La Mancha), both eggplant and zucchini are used, but this variation calls for one or the other to decrease the amount of prep work. Feel free to use both if you'd like. The unpeeled vegetables are either chopped, for a more rustic texture, or diced, for a saucier stew.

Pisto can be a side dish, or it can be spooned atop a slice of bread for a tapa, spread inside a sandwich or used as a base in a soup. It is often served with an egg. Here, the eggs are fried atop piles of shredded Manchego cheese, which become lacy and crisp. Feel free to skip the cheese, or poach the eggs instead. You can also use a spoon to make nests in the pisto and let the eggs cook gently in the simmering vegetables before serving.

If you avoid onions and garlic for dietary reasons, use an infused oil instead.

Out of fresh tomatoes? Use the same weight in whole, canned tomatoes. Use a spoon to smush them so they cook down into the sauce.

No Manchego? Parmesan, pecorino or another hard cheese will work instead.

Can't have bell peppers? Use more of the other vegetables.

Storage Notes: Refrigerate for up to 4 days or freeze, wrapped airtight, for 1 month.

2 sprigs fresh oregano or thyme, plus more for garnish if desired

In a large, shallow skillet over medium-high heat, heat the olive oil until it shimmers. Add the onion and a pinch of salt. Cook, stirring occasionally, until the onion begins to take on color, about 5 minutes. Add the garlic, bell peppers, zucchini or eggplant, and oregano or thyme. Cook, stirring occasionally, until the vegetables soften, using the edge of your spoon to help break them up a bit, about 8 minutes.

Meanwhile, using the large holes of a box grater, grate the tomatoes into a bowl; discard any leftover skins. You should have about 1 3/4 cup of grated tomato. Stir the grated tomato and wine or water into the vegetables. Decrease the heat to medium-low and simmer until the sauce thickens, about 5 minutes. Fish out the herb stems and discard. Taste, and season with salt, pepper, and honey or sugar, if desired. The final pisto can be as saucy or chunky as you like. Add additional wine for a saucier pisto; cook it longer to evaporate more of the liquid for a thicker, spreadable pisto.

Divide the pisto among shallow bowls or plates.

In a large, nonstick skillet over medium heat, heat 1 to 2 teaspoons of olive oil until it shimmers. Spread it around with a spatula or brush so that the pan is lightly greased. Starting on one side of the pan, sprinkle about 3 tablespoons of the cheese in a 4-inch-wide circle, leaving the center open. Repeat, making 3 more cheese circles. (Cook the eggs two at a time, if your skillet is too small.) Increase the heat to medium-high and crack an egg into the center of each circle. Season the eggs lightly with salt and pepper, if desired. Cover and cook just until the whites are opaque and the cheese has browned, about 1 minute - or until the egg is done to your liking. Uncover, and, using a spatula, slide each egg onto one of the pisto bowls. Serve warm, garnished with fresh oregano or thyme leaves, if desired. 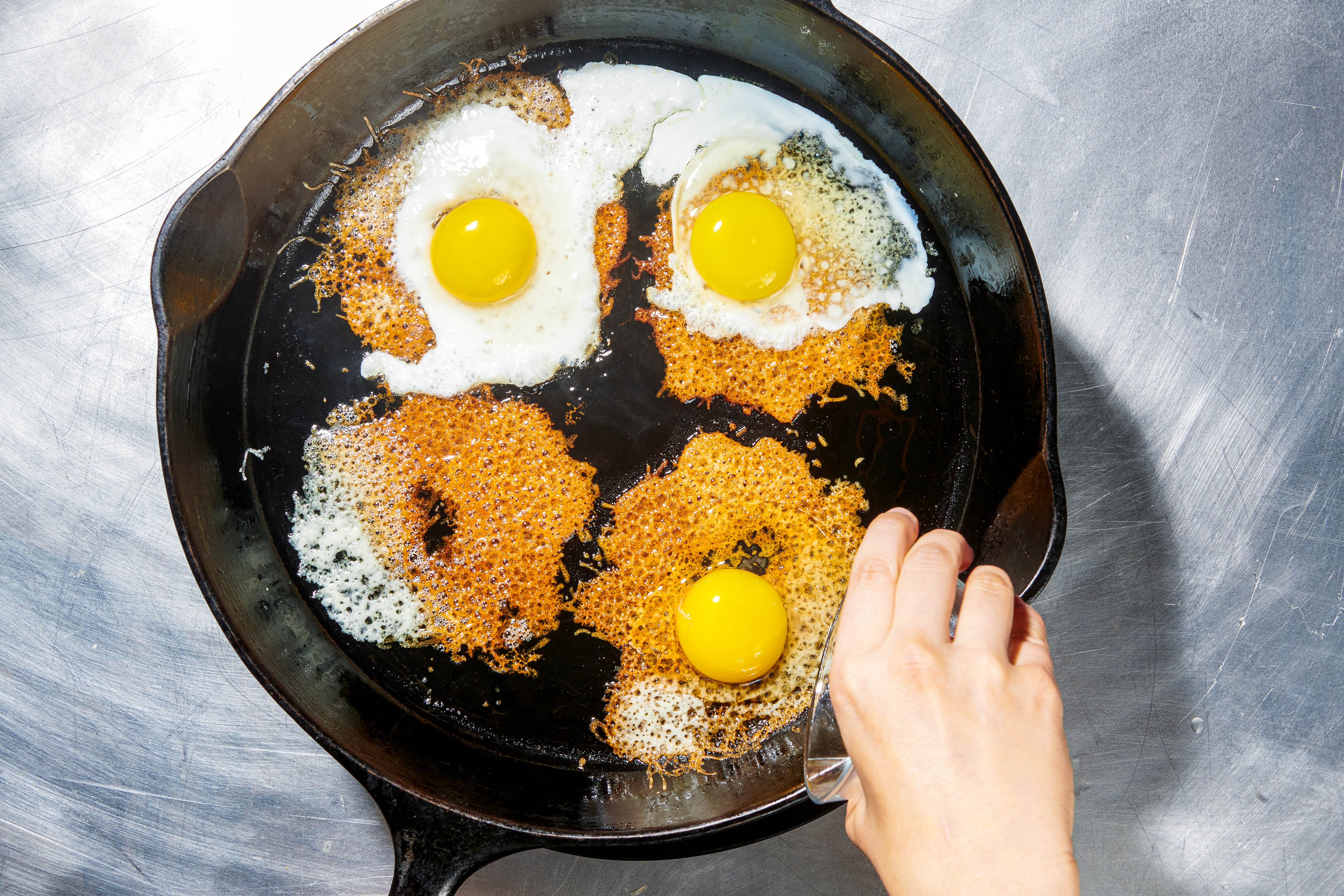 Increase the heat to medium-high and crack an egg into the center of each circle. MUST CREDIT: Photo by Rey Lopez for The Washington Post.

Print Headline: Savor the end of summer with pisto, a Spanish vegetable stew