Airport board, officials get look at terminal construction 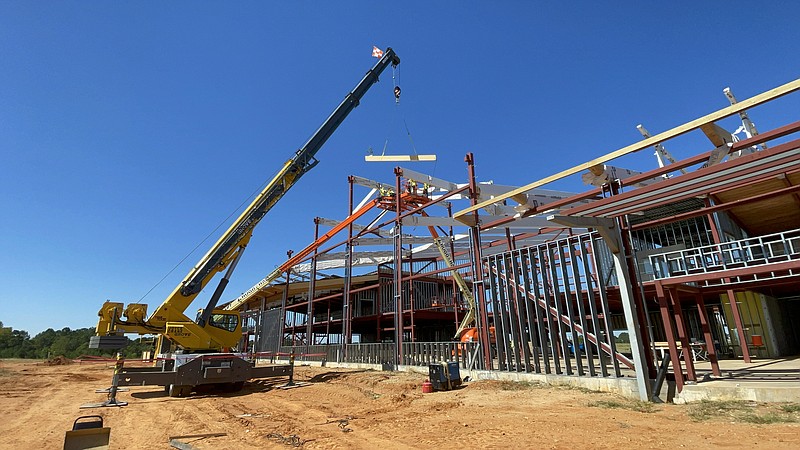 TEXARKANA, Ark. -- Dozens of local government and Texarkana Regional Airport officials sported hard hats as they gathered Thursday for a "topping out" ceremony.

Ongoing construction on the airport's $36 million passenger terminal took the spotlight as the building's steel structure moved from Phase 1 construction to Phase 2 roofing work, which is set to be complete by the end of December.

City officials and construction workers with Conway, Arkansas-based Nabholz Construction Services firm signed their names to one of the terminal building's beams before it was hoisted to the roof. A small Southern pine tree was planted as a symbol of safety and protection for all the work crews.

"We are here to thank all of those working on this major landmark in our community," said Paul Mehrlich, airport executive director. "We are celebrating a major milestone, and we have an evergreen tree that represents safety, because we've had no injuries or accidents so far, and we want to keep it accident free as we move to the next phase.

Mehrlich said Phase 3 is expected to start early next year. Work will involve installing the terminal's interior walls, ceilings and flooring, as well as air conditioning, heating and plumbing.

The terminal's fourth and final phase is slated to take place in early 2024 and will focus on installation of the terminal's jet boarding bridges.

Print Headline: Airport board, officials get look at terminal construction